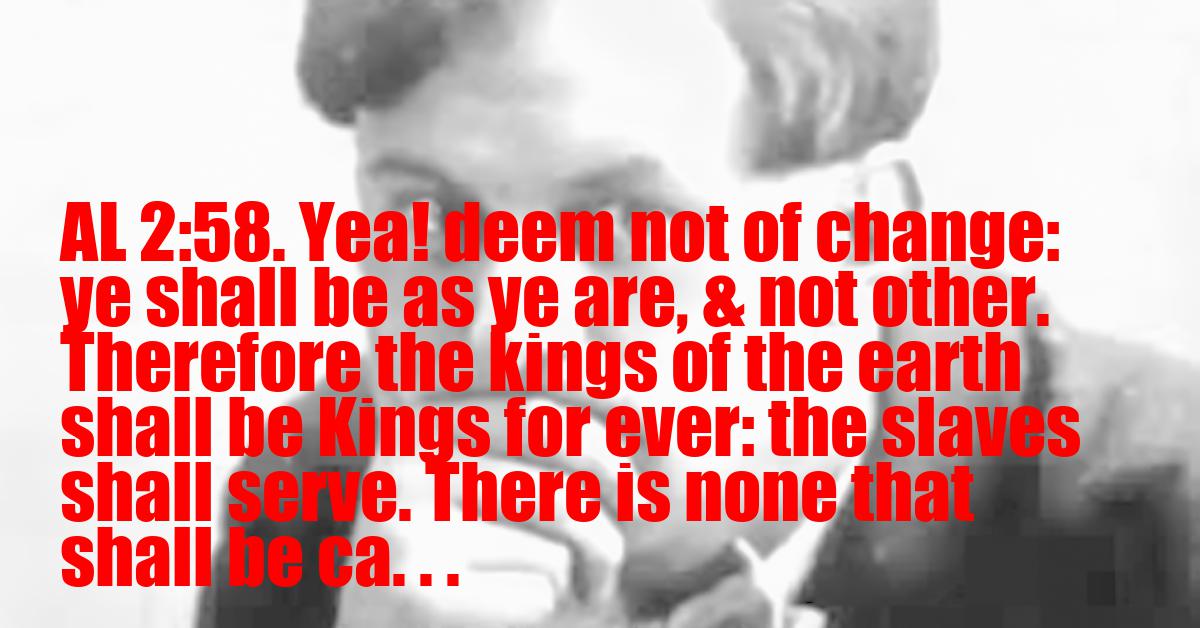 Yea! deem not of change: ye shall be as ye are, & not other. Therefore the kings of the earth shall be Kings for ever: the slaves shall serve. There is none that shall be cast down or lifted up: all is ever as it was. Yet there are masked ones my servants: it may be that yonder beggar is a King. A King may choose his garment as he will: there is no certain test: but a beggar cannot hide his poverty.

The Djeridensis Comment
(57-58.) "People who shift their point of view," the Angel repeats, "are not truly themselves." Though each event is change, these changes form a closed curve so that their sum is zero. I have dealt with this subject fully in other writings. The essence of the doctrine is that things are stable only by virtue of their constant change, which is life. To cease to change is to die, which is the one real change that can occur. When it occurs, it proves that true life was never there.
This doctrine is at once applied to the question of the Kings and the slaves. The Angel explains that there are two types of men — the slave can never rise, the king can never fall. Should such things seem to take place, it is a sign of some disguise; the essence of the man, if he be in truth a man, is always the same. It is a point of view which never alters really, though each fresh fact brings it more fully into light. I am told of one case which must not deceive me. I must not assume that a man who seems a beggar is one. He may be a King whose pleasure is to disguise himself. He can, of course, resume his crown and sceptre when he tires of his sport, whereas a beggar has not the means to pretend to be a king. The point of this is that I may find it needful to judge the claims of such men as I may meet; and Aiwass here assures me that I shall find it easy to detect sham kings; but warns me against scorning those who do not flaunt their virtue.

The Old Comment
Yet it does not follow that He (and His) must appear joyous. They may assume the disguise of sorrow.