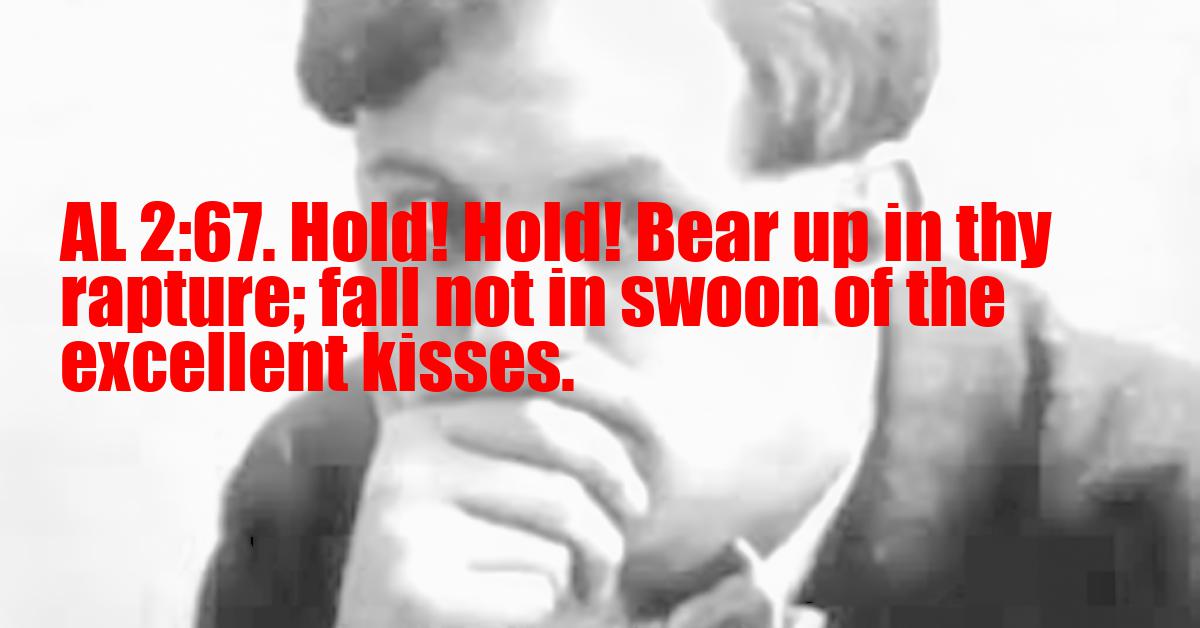 Hold! Hold! Bear up in thy rapture; fall not in swoon of the excellent kisses!

The Old Comment
(67-68.) So violently that the body of the prophet is nigh death.

The New Comment
The instructions in the text of this and the next verse were actual indications as to how to behave, so as to get the full effect of the Trance.
This too is a general Magical Formula, convenient even in the Work of the physical image of the Godhead.
It is of the utmost importance to resist the temptation to let oneself be carried away into trance (or orgasm). One should summon one's reserve forces to react against the tendency to lose normal consciousness. More and more of one's being is gradually drawn into the struggle, and one only yields at the last moment. (It needs practice and courage to get the best results.). I quote from the Holy Books:
"Fall not into death, O my soul! Think that death is the bed into which you are falling!" (Liber VII, I,33.)
"Thou hast brought me into great delight. Thou hast given me of Thy flesh to eat and of Thy blood for an offering of intoxication.
Thou hast fastened the fangs of Eternity in my soul, and the Poison of the Infinite hath consumed me utterly.
I am become like a luscious devil of Italy; a fair strong woman with worn cheeks, eaten out with Hunger for kisses. She hath played the harlot in diverse palaces; she hath given her body to the beasts.
She hath slain her kinsfolk with strong venom of toads; she hath been scourged with many rods.
She hath been broken in pieces upon the Wheel; the hands of the hangman have bound her unto it.
The fountains of water have been loosed upon her; she hath struggled with exceeding torment.
The hath burst in sunder with the weights of the waters; she hath sunk into the awful Sea. So am I, O Adonai, my lord, and such are the waters of Thine intolerable Essence.
So am I, O Adonai, my beloved, and Thou hast burst me utterly in sunder.
I am shed out like spilt blood upon the mountains; the Ravens of Dispersion have borne me utterly away.
Therefore is the seal unloosed, that guarded the Eighth abyss; therefore is the vast sea as a veil; therefore is there a rending asunder of all things." (Liber LXV, III, vv. 38-48.)
"Intoxicate the inmost, O my lover, not the outermost!" (Liber LXV, I, v.64).