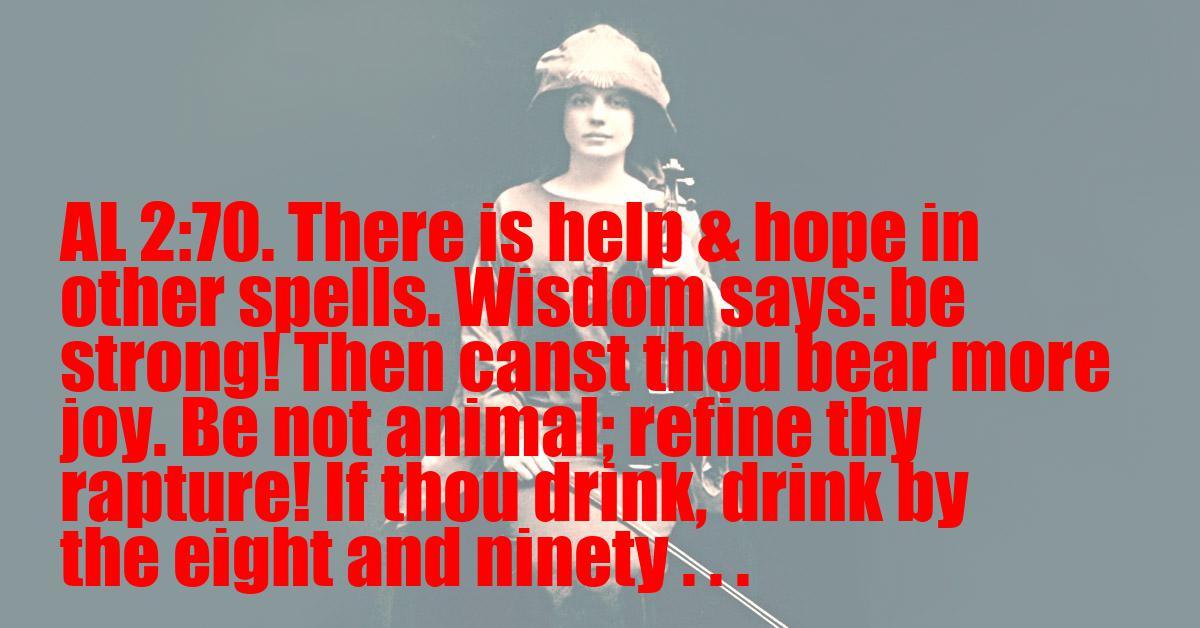 There is help & hope in other spells. Wisdom says: be strong! Then canst thou bear more joy. Be not animal; refine thy rapture! If thou drink, drink by the eight and ninety rules of art: if thou love, exceed by delicacy; and if thou do aught joyous, let there be subtlety therein!

The Djeridensis Comment
(69-70.) After a time my mortal part failed to endure the stress of the rapture. I came to myself, or rather wandered from myself, wondering who I was, and what had happened, and whether the word was at an end. Aiwass then taught me how to prepare myself for such supreme events. I should mention that this trance fulfilled the promise which I had asked of the Secret Chiefs when I agreed to accept the task they wished to lay upon me. "If I am to fill my office as I should, I must have first attained to that clear sight of truth without which every act of mine would certainly be an error." I had worked hard for a long time to attain some such trance and had never come near success. Yet now, without a word of warning I was caught up into it. The secret was this: the breaking down of my false Will by those dread words of mine Angel freed my True Self from all its bonds, so that I could enjoy at once the rapture of knowing myself to be who I am. To prepare oneself for such work one should strengthen oneself in every way, so as to be able to "bear more joy." This does not imply brute vigour. The nature of rapture is such that the finer it is, the stronger it is. Thus, in making oneself drunk to worship Hadit, one should observe the "eight and ninety rules of art" (I explain elsewhere the meaning of these figure). Likewise, in love, excess is not to be attained by violent lust. The artist is the model. One must learn to enjoy every least detail; yet blend them all into one single sublime concept. The same tactics apply to all joyous deeds. The key to success is subtlety.

The Old Comment
Also he has the human feeling of failure. It seems that he must fortify his nature in many other ways, in order that he may endure the ecstasy unbearable of mortals.
There is also a charge that other than physical considerations obtain.

The New Comment
It is absurd to suppose that 'to indulge the passions' is necessarily a reversion or degeneration. On the contrary, all human progress has depended on such indulgence. Every art and science is intended to gratify some fundamental need of nature. What is the ultimate use of the telephone and all the other inventions on which we pride ourselves? Only to sustain life, or to protect or reproduce it; or to subserve Knowledge and other forms of pleasure.
On the other hand, the passions must be understood properly as what they are, nothing in themselves, but the diverse forms of expression employed by the Will. One must preserve discipline. A passion cannot be good or bad, too weak or too strong, etc. by an arbitrary standard. Its virtue consists solely in its conformity with the plan of the Commander-in-Chief. Its initiative and elan are limited by the requirements of his strategy. For instance, modesty may well cooperate with ambition; but also it may thwart it. This verse counsels us to train our passions to the highest degree of efficiency. Each is to acquire the utmost strength and intelligence; but all are equally to contribute their quota towards the success of the campaign.
It is nonsense to bring a verdict of "Guilty" or "Not Guilty" against a prisoner without reference to the law under which he is living. The end justifies the means: if the Jesuits do not assert this, I do. There is obviously a limit, where "the means" in any case are such that their use blasphemes "the end": e.g. to murder one's rich aunt affirms the right of one's poor nephew to repeat the trick, and so to go against one's own Will-to-live, which lies deeper in one's being than the mere Will-to-inherit. The judge in each case is not ideal morality, but inherent logic.
This then being understood, that we cannot call any given passion good or bad absolutely, any more than we can call Knight to King's Fifth a good or bad move in chess without study of the position, we may see more clearly what this verse implies. There is here a general instruction to refine Pleasure, not by excluding its gross elements, but by emphasizing all elements in equilibrated development. Thus one is to combind the joys of Messalina with those of Saint Theresa and Isolde in one single act. One's rapture is to include those of Blake, Petrarch, Shelley, and Catullus. Liber Aleph has detailed instruction on numerous points involved in these questions.
Why "eight and ninety" rules of art? I am totally unable to suggest a reason satisfactory to myself; but 90 is Tzaddi, the "Emperor", and 8, Cheth, the "Charioteer" or Cup-Bearer; the phrase might them conceivably mean "with majesty". Alternatively, 98 = 2 x 49: now Two is the number of the Will, and Seven of the passive senses. 98 might then mean the full expansion of the senses (7 x 7) balanced against each other, and controlled firmly by the Will.