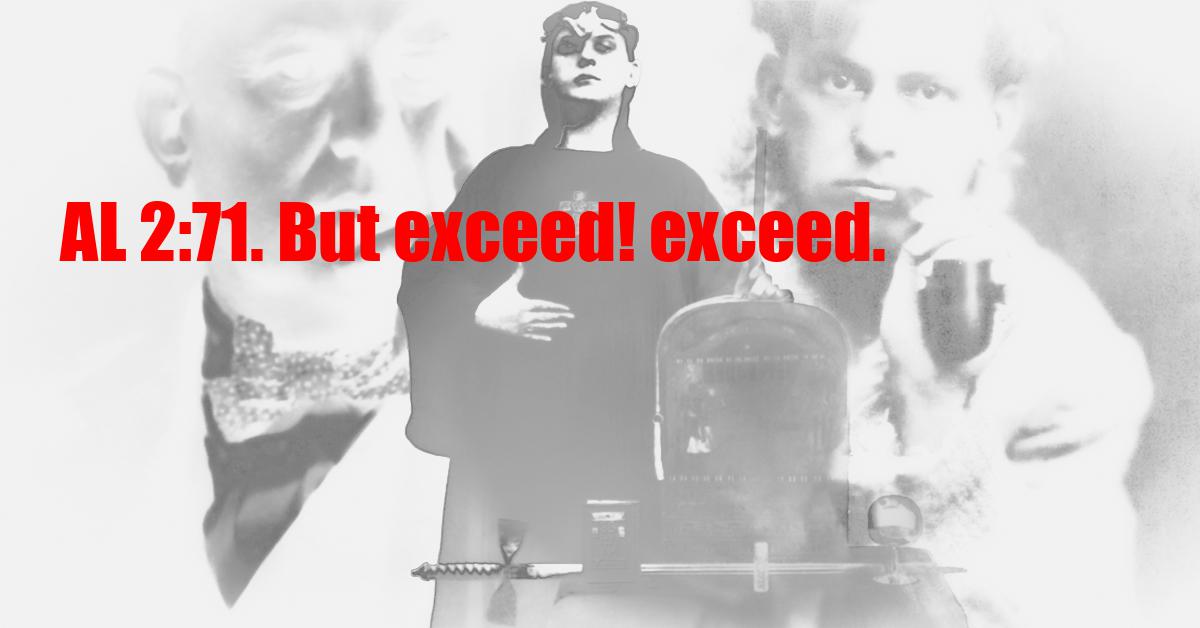 The Djeridensis Comment
Aiwass hastens to warn me that I must not take these words to mean that we should dilute our pleasures. We should not be genteel and dainty. Never forget that all the tricks of art are worse than worthless, unless they spring from strength and passion. The essence of success is the intense desire to beat one’s own record as well as the world’s in every thing one does. The most fatal fault is to become tired of the task, through having chosen one in which one may become perfect, and sigh for more worlds to conquer.

The Old Comment
Yet excess is the secret of success.

The New Comment
"The Road of Excess leads to the Palace of Wisdom". ― "You never know what is enough until you know hwat is too much." So wrote William O'Neill .
Progress, as its very etymology declares, means A Step Ahead. It is the Genius, the Eccentric, the Man Who Goes One Better than his fellows, that is the Saviour of the Race. And while it is unwise possibly (in some senses) to exceed in certain respects, we may be sure that he who exceeds in no respect is a mediocrity.
The key of Evolution is Right Variation.
Excess is evidence at least of capacity in the quality at issue. The golf teacher growls tirelessly: "Putt for the back of the hole! Never up, never in!" The application is universal. Far from me be it to deny that excess is too often disastrous. The athlete who dies in his early prime is the skeleton at every Boat Supper. But in such cases the excess is almost always due to the desire to excel other men, instead of referring the matter to the only competent judge, the true Will of the body. I myself used to "go all out" on mountains; I hold more World's Records of various kinds than I can reckon – for pace, skill, daring, and endurance. But I never worried about whether other people could beat me. For this reason my excesses, instead of causing damage to health and danger to life, turned me from a delicate boy, too frail for football, doomed by my doctors to die in my teens, into a robust ruffian who throve on every kind of hardship and exposure.
On the contrary, every department of life in which, from distaste or laziness, I did not 'exceed', is constantly crippling me in one way or another – and I recognize with savage remorse that the weakness which I could have corrected so easily in my twenties is in my forties an incurably chronic complaint.