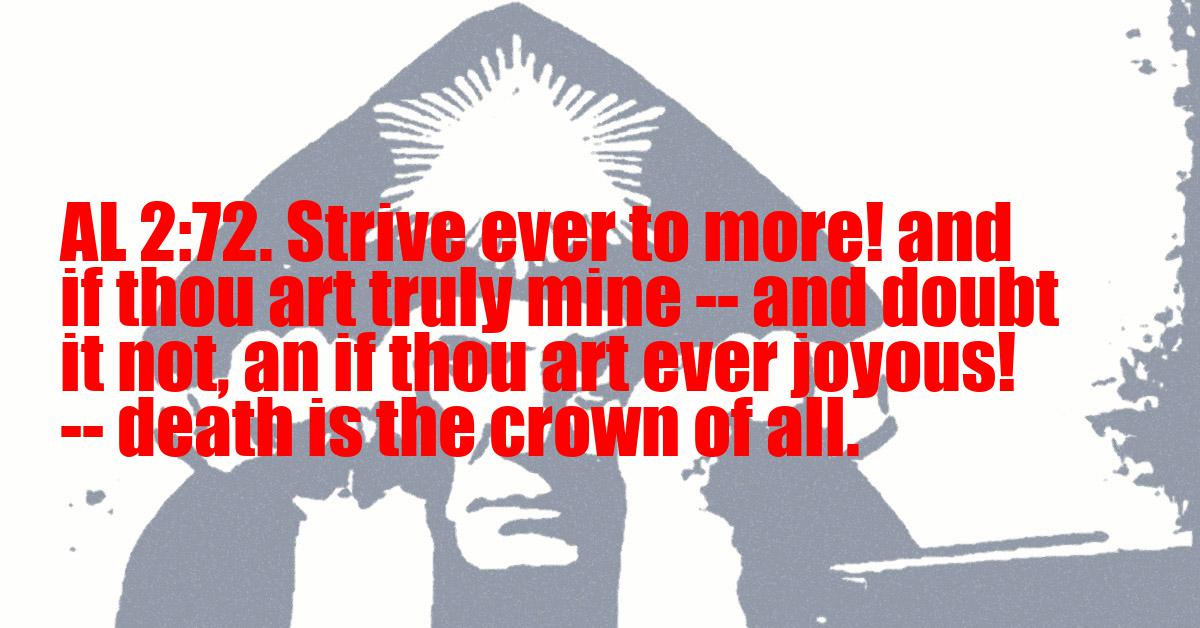 Strive ever to more! and if thou art truly mine — and doubt it not, an if thou art ever joyous! — death is the crown of all.

The Djeridensis Comment
It is implied that the course of life itself should be made a work of Art, that one should aim at death as the one fit climax. One should die in harness.

The Old Comment
There is no end to the Path — death itself crowns all.

The New Comment
This striving is to be strenuous. We are not to set our lives at a pin's fee. "Unhand me, gentlemen! I'll make a ghost of him that lets me!" Death is the End that crowns the Work.
Evolution works by variation. When an animal develops one part of itself beyond the others, it infringes the norm of its type. At first this effort is made at the expense of other efforts, and it seems as if, the general balance being upset, the Nature were in danger. (It must obviously appear so to the casual observer – who probably reproaches and persecutes the experimenter). But when this variation is intended to meet some new, or even foreseen, change in environment, and is paid for by some surplus part, or some part now superfluous, although once useful to meet a quality of the environment which no longer menaces the individual, the adaptation is biologically profitable.
Obviously, the whole idea of exercise, mental or bodily, is to develop the involved organs in manner physiologically and psychologically proper.
It is deleterious to force any faculty to live by an alien law. When parents insist on a boy adopting a profession which he loathes, because they themselves fancy it; when Florence Nightingale fought to open hospital windows in India at night; then the Ideal mutilates and murders.
Every organ has 'no law beyond Do what thou wilt'. Its law is determined by the history of its development, and by its present relations with its fellow-citizens. We do not fortify our lungs and our limbs by identical methods, or aim at the same tokens of success in training the throat of the tenor and the fingers of the fiddler. But all laws are alike in this: they agree that power and tone come from persistently practising the proper exercise without overstraining. When a faculty is freely fulfilling its function, it will grow; the test is its willingness to 'strive ever to more'; it justifies itself by being 'ever joyous'. It follows that 'death is the crown of all'. For a life which has fulfilled all its possibilities ceases to have a purpose; death is its diploma, so to speak; it is ready to apply itself to the new conditions of a larger life. Just so a schoolboy who has mastered his work, dies to school, reincarnates in cap & gown, triumphs in the trips, dies to the cloisters, and is reborn to the world.
Note that the Atu "Death" in the Tarot refers to Scorpio. This sign is threefold: the Scorpion that kills itself with its own poison, when its environment (the ring of fire) becomes intolerable; the Serpent that renews itself by shedding its skin, that is crowned and hooded, that moves by undulations like Light, and gives man Wisdom at the price of Toil Suffering and Mortality; and the Eagle that soars, its lidless eyes bent boldly upon the Sun. "Death" is, to the initiate, as inn by the wayside; its marks a stage accomplished; it offers refreshment, repose, and advice as to his plans for the morrow.
But in this verse the main point is that death is the 'crown' of all. The crown is Kether, the Unity; "Love under will" having been applied to all Nuith-possibilities of all Khu-energies of any Hadit-central-Star, that Star has exhausted itself perfectly, completed one stage of its course. It is therefore crowned by death; and, being wholly itself, lives again by attracting its equal and opposite Counterpart, with whom 'love under will' is the fulfilment of the Law, in a sublimer sphere.
But there are no rules until one finds them: a man leaving Ireland for the Sahara does well to discard such 'indispensable' and 'proper' things as a waterproof and a blackthorn for a turban and a dagger.
The 'moral' man is living by the no-reason of Laws, and that is stupid and inadequate even when the Laws still hold good; for he is a mere mechanism, resourceless should any danger that is not already provided for in his original design chance to arise. Respect for routine is the mark of the second-rate man.

The 'immoral' man, defying convention by shouting aloud in church, may indeed be 'brawling'; but equally he may be a sensitive who has felt the first tremor of an earthquake.
We of Thelema encourage every possible variation; we welcome every new 'sport'; its success or failure is our sole test of its value. We let the hen's queer hatching take to water, and laugh at her alarms; and we protect the 'ugly duckling', knowing that Time will tell us whether it be a cygnet.
Herbert Spencer, inexorably condemning the Unfit to the gallows, only echoed the High-Priest who protected Paul from the Pharisees. Sound biology and sound theology are for once at one!
The question of the limits of individual Liberty is fully discussed in Liber CXI (Aleph), to which we refer the student. The following four chapters will give a general idea of the main principles.
De Vi Per Disciplinam Colenda.
"Consider the Bond of a cold Climate, how it maketh man a Slave; he must have Shelter and Food with fierce Toil. Yet thereby he becometh strong against the Elements, and his moral Force waxeth, so that he is Master of such Men as live in Lands of Sun where bodily Needs are satisfied without Struggle.
Consider also him that willeth to excel in Speed or in Battle, how he denieth himself the Food he craveth, and all Pleasures natural to him, putting himself under the harsh Order of a Trainer. So by this Bondage he hath, at the last, his Will.
Now then the one by natural, and the other by voluntary, Restriction have come each to a greater Liberty. This is also a general law of Biology, for all Development is Structuralization; that is, Limitation and Specialization of an originally indeterminate Protoplasm, which latter may therefore be called free, in the definition of a Pendant."
De Ordins Rerum.
"In the Body every Cell is subordinated to the general physiological Control, and we who will that Control do not ask whether each individual Unit of that Structure be consciously happy. But we do care that each shall fulfil its Function, and the Failure of even a few Cells, or their Revolt, may involve the Death of the whole Organism. Yet even here the Complaint of a few, which we call pain, is a Warning of general Danger. Many Cells fulfil their Destiny by swift Death, and this being their Function, they in no wise resent it. Should Haemoglobin resist the Attack of Oxygen, the Body would perish, and the HAEMOGLOBIN would not even save itself. Now, o my Son, do then consider deeply of these Things in thine Ordering of the World under the Law of Thelema. For every Individual in the State must be perfect in his own Function, with Contentment, respecting his own Task as necessary and holy, not envious of another's. For so only mayst thou build up a free state, whose directing Will shall be singly directed to the Welfare of all".
We of Thelema think it vitally aright to let a man take opium. He may destroy his physical vehicle thereby (The vehicle is his, not ours!), but he may produce another "Kubla Khan". It is his own responsibility. Also we know well that "if he be a King" it will not hurt him – in the end. We trust Nature to protect, and Wisdom to be justified of, their children. It is superficial to object that a man should be prevented from ruining and killing himself, for his own sake or for that of "those dependent on him". One who is unfit to survive aught to be allowed to die. We want only those who can conquer themselves and their environment. As for "those dependent on him" it is one of our chief objects to abolish the very idea of dependence on others. Women with child, and infants, are not exceptions, as might seem. They are doing their will, the one class to reproduce, the other to live; the state should consider their welfare to be its first duty; for if they are for the moment dependent on it, it is also dependent on them. A man might as well cut out his heart because it was weak, and in need of cautious care. But he would be no less foolish if he tried to prevent the used-up elements from eliminating themselves from his body. We respect the Will-to-Live; we should respect the Will-to Die. The race is auto-intoxicated by suppressing the excretory processes of Nature.
Each case must of course be judged on its merits. His neighbours do well to assist one who is weak by accident or misfortune, if he wishes to recover. But it is a crime against the state and against the individuals in question to hinder the gambler, the drunkard, the voluptuary, the congenital defective, from drifting to death, unless they prove by their own dogged determination to master their circumstances, that they are fit to pull their weight in the Noah's Ark of mankind.