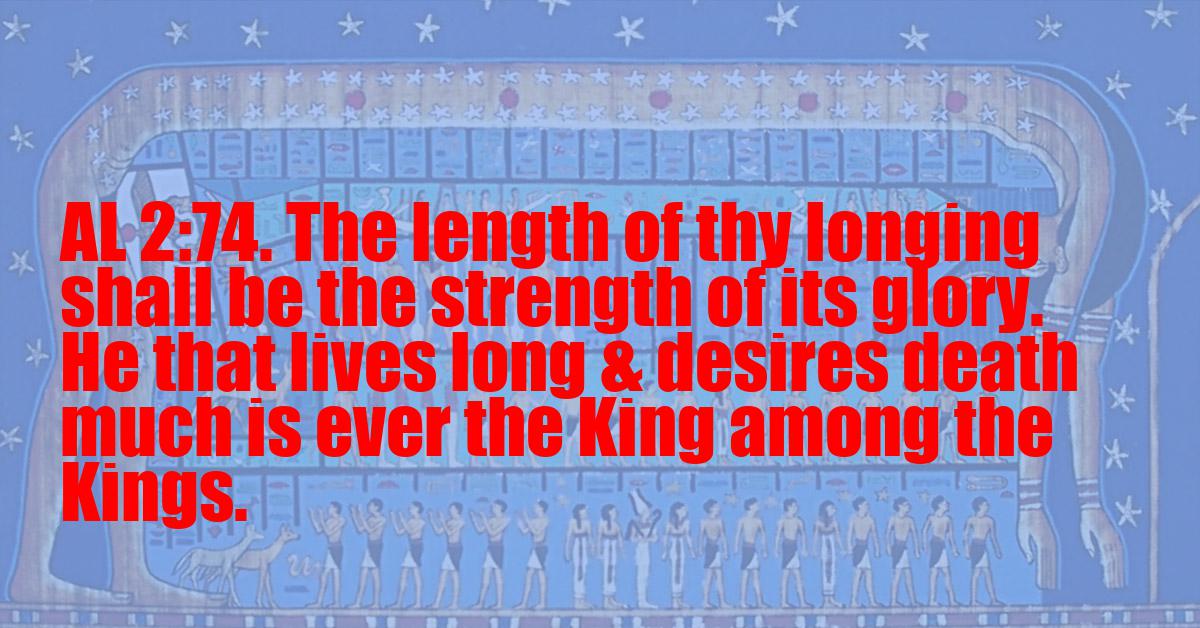 The length of thy longing shall be the strength of its glory. He that lives long & desires death much is ever the King among the Kings.

The Djeridensis Comment
(73-74.) A final challenge rings out sharp. There is a doctrine with regard to death, stranger perhaps than all the others. It is a mark of success in Magick to get one’s work done fully in one’s prime, so that life has nothing left to offer, and one begins to long for the great journey into the unknown — the Call of the Old Long Trail. It is not lawful to hasten the start. The measure of the splendour of death is the strength and courage needed while waiting for it. The longer one lives and the more one wills to die, the more royal is one’s nature.

The Old Comment
(73-74.) Yet death is forbidden: work, I suppose, must be done before it is earned; its splendour will increase with the years that it is longed for.

The New Comment
One does not need to be constantly popping in and out of Trance. One ought to do both actions with ever increasing length and strength of swing. Hence one's life-periods, where this counts, become gradually larger and more vivid, and one's death-periods though very short, perhaps, may be unfathomably intense.
The whole question of Time has been thoroughly investigated already. The present remarks refer only to the conditions of "normal" consciousness, into which we throw ourselves at recurring intervals. The doctrine here stated should be studied in the light of previous remarks; verses 61 to 74 inclusive form a coherent passage: notice the words "death" in verses 68. There is evidently an intention to identify the Climax of Love with that of Life. It is then not unnatural for us to ask: Can 'Death' have some deeper significance than appears? Scorpio, the Zodiacal Sign of Death, is really the Sexual or Reproductive function of Nature. It is the Earth-transcending Eagle, the self-restoring Serpent, and the self-immolating Scorpion. In alchemy it is the principle of Putrefaction, the "Black Dragon", whose state of apparent corruption is but a prelude to the Rainbow-coloured Spring-tide of the Man in Motley. The nymph of Spring, Syrinx, the trembling hollow reed which needs but Breath to fill the world with Music, attracts Pan, the Goat-God of Ecstatic Lust, by whose Work the glory of Summer is established anew.
It is obvious that "the length of thy longing" varies with the number of potentialities to be satisfied. In other words, the more complex the Khu of the Star, the greater the man, and the keener his sense of his need to achieve it.