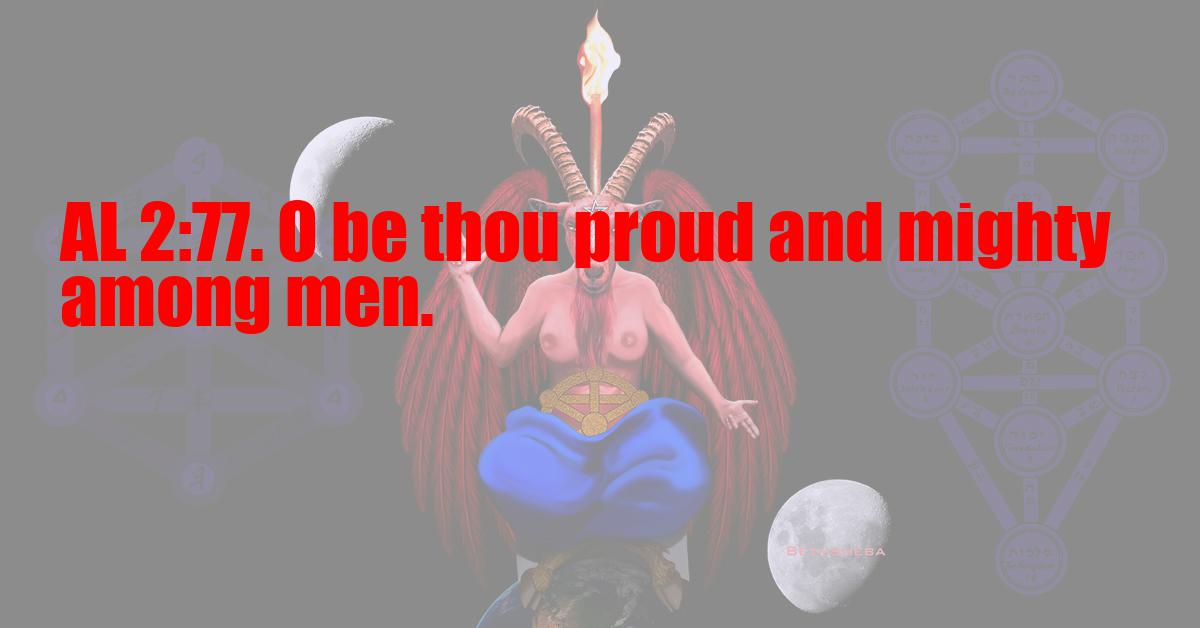 O be thou proud and mighty among men!

The Djeridensis Comment
(77-78.) Well knowing how men always act towards any prophet of Truth, mine Angel bids me to be "proud and mighty among men" — not to be humbled by the scorn or weakened by the blows of my fellows. In the middle of the Charter it was said "I lift thee up". Now there is no more need of that. He cries "Lift up thyself!" He reminds me of my unique place in the ranks of men and Gods. "Lift up thyself," he repeats; and tells me "thy stature shall surpass the stars." My name shall be held worthy of worship, as also that of my house. There is again a secret meaning to this verse: it will be explained elsewhere.

The Old Comment
(77-78.) Though the prophet had in a way at this time identified himself with the number 666, he considered the magic square drawn therefrom rather silly and artificial, if indeed it had yet been devised, on which point he is uncertain.
The true Square is as follows:
[It follows when it is discovered!]
The House of the Prophet, not named by him, was chosen by him before he attached any meaning to the number 418; nor had he thought of attaching any importance to the name of the House. He supposed this passage to be mystical, or to refer to some future house.
Yet on trial we obtain at once
Boleskine = בּולשׁכּין {Beth-Vau-Lamed-Shin-Kaph-Yod-Nun} [HB:BVLShKY] = 418

The New Comment
Pride is the quality of Sol, Tiphareth; Might of Mars, Geburah. Now Leo – my rising sign – combines these ideas, as does Ra-Hoor-Khuit. The Christian ideas of humility and weakness as 'virtues' are natural to slaves, cowards, and defectives.

The type of tailless simian who finds himself a mere forked radish in a universe of giants clamouring for hors d'oeuvres must take refuge from Reality in Freudian phantasies of 'God'. He winces at the touch of Truth; and shivers at his nakedness in Nature.
He therefore invents a cult of fear and shame, and makes it presumption and blasphemy to possess courage and self-respect. He burrows in the slime of "Reverence, and godly fear; and makes himself houses of his own excrement, like the earthworm he is. He shams dead, like other vile insects, at the approach of danger; he tries to escape notice by assuming the colour and form of his surroundings, using 'protective mimicry' like certain other invertebrates.
He exudes stink or ink like the skunk or the cuttle-fish, calling the one Morality and the other Decency. He is slippery with Hypocrisy, like a slug; and, labelling the totality of his defects Perfection, defines God as Faeces so that he may flatter himself with the epithet divine. The whole manoeuvre is described as Religion.