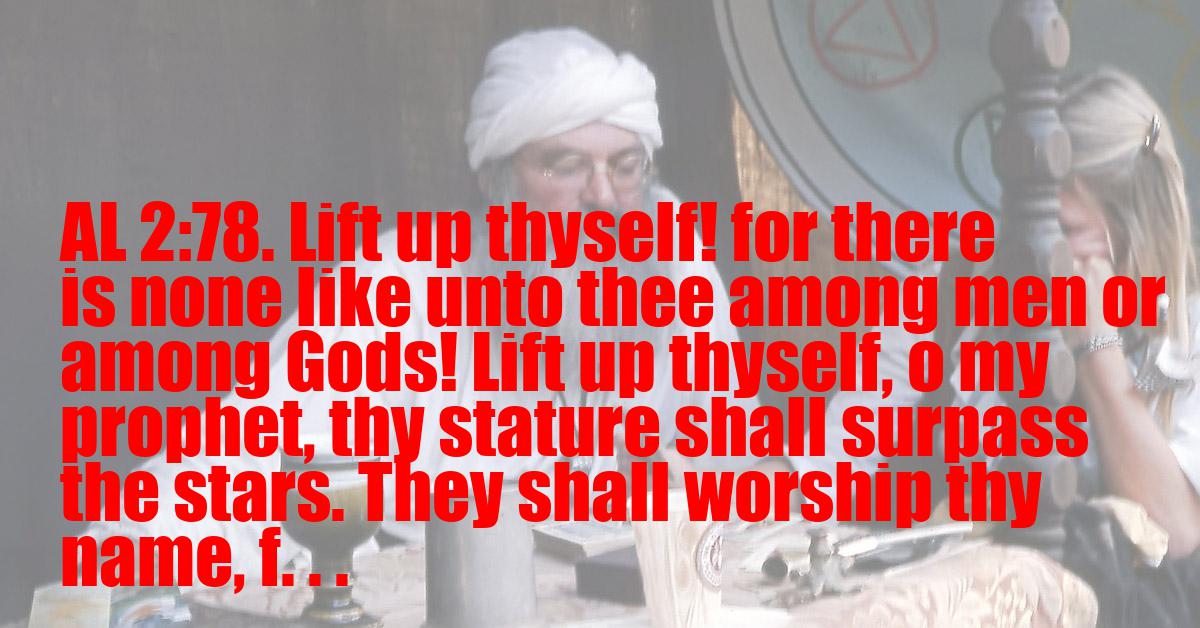 Lift up thyself! for there is none like unto thee among men or among Gods! Lift up thyself, o my prophet, thy stature shall surpass the stars. They shall worship thy name, foursquare, mystic, wonderful, the number of the man; and the name of thy house 418.

The Djeridensis Comment
(77-78.) Well knowing how men always act towards any prophet of Truth, mine Angel bids me to be "proud and mighty among men" — not to be humbled by the scorn or weakened by the blows of my fellows. In the middle of the Charter it was said "I lift thee up". Now there is no more need of that. He cries "Lift up thyself!" He reminds me of my unique place in the ranks of men and Gods. "Lift up thyself," he repeats; and tells me "thy stature shall surpass the stars." My name shall be held worthy of worship, as also that of my house. There is again a secret meaning to this verse: it will be explained elsewhere.

The Old Comment
(77-78.) Though the prophet had in a way at this time identified himself with the number 666, he considered the magic square drawn therefrom rather silly and artificial, if indeed it had yet been devised, on which point he is uncertain.
The true Square is as follows:
[It follows when it is discovered!]
The House of the Prophet, not named by him, was chosen by him before he attached any meaning to the number 418; nor had he thought of attaching any importance to the name of the House. He supposed this passage to be mystical, or to refer to some future house.
Yet on trial we obtain at once
Boleskine = בּולשׁכּין {Beth-Vau-Lamed-Shin-Kaph-Yod-Nun} [HB:BVLShKY] = 418

The New Comment
There are certain occult wonders concealed in the first part of this text. (See Liber CCCLXX).
The solution of the last sentence may depend upon the number of the verse, which is that of Mezla, the Influx from the Highest, and of the Book of Thoth, or Tarot.
We may take "thy name" as "the Sun", for Qabalistic reasons given in the Appendix; the verse need not imply the establishment of a new cult with myself as Demigod. (Help!) But they shall worship the group of ideas connected with the Sun, and the magical formula of the number 418, explained elsewhere.