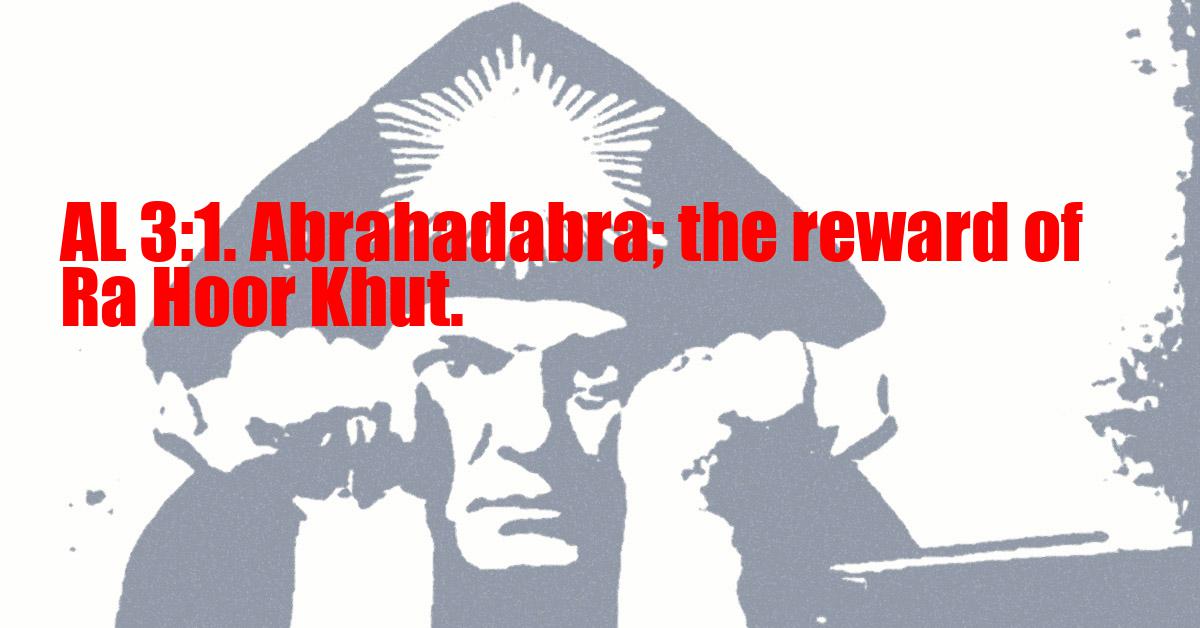 The Old Comment
Abrahadabra — the Reward of Ra-HoorKhuit. We have already seen that Abrahadabra is the glyph of the blending of the 5 and the 6, the Rose and the Cross. So also the Great Work, the equilibration of the 5 and the 6, is shown in this God; fivefold as a Warrior Horus, sixfold as the solar Ra. Khuit is a name of Khem the Ram-Phallus-two-plume god Amon; so that the whole god represents in qabalistic symbolism the Second Triad ("whom all nations of men call the first").
It is the Red descending Triangle — the sole thing visible. For Hadit and Nuit are far beyond.
Note that Ra-Hoor ראהוור {Resh-Aleph-He-Vau-Vau-Resh} [HB:RAHVVR] = 418.

The New Comment
Observe firstly the word "reward", which is to be compared with the words "hiding" and "manifestation" in the former chapters. To 're-ward' is to 'guard again'; this word Abrahadabra then is also to be considered as a Sentinel before the Fortress of the God.
Why is the name of Him spelt Khut? We have seen that ST is the regular honorific terminitation for a God. Ra is, as shown in the Old Comment, the Sun, Hoor the Warrior Mars; who is Khu? He is the Magical Ego of a Star. Without the Yod or Iota, Khu-t, we get a human conception; the insertion of that letter makes the transmutation to Godhead. When therefore Ra Hoor Khut is rewarded or Re-guarded with the Magick Word of the Aeon, he becomes God. Thus in the next verse. I 'raise the spell of Ra Hoor Khuit'.
The text may also be read as follows. Abrahadabra is the formula of the Aeon, by which man may accomplish the Great Work. This Formula is then the 'reward' given by the God, the largesse granted by Him on His accession to the Lordship of the Aeon, just as the INRI-IAO-LVX formula of attainment by way of Crucifixion was given by Osiris when he came to power in the last Aeon. (See Book 4 Part III, and Equinnox I, III, pp. 208-233).
I must here say that I find myself in the greatest difficulty, again and again, in the comprehension of this chapter. It might be said roughly that at the end of the first five years of Silence (An 0-IV) I understood Chapter I; at the end of the second five years (an X-XIV) I understood Chapter II, —