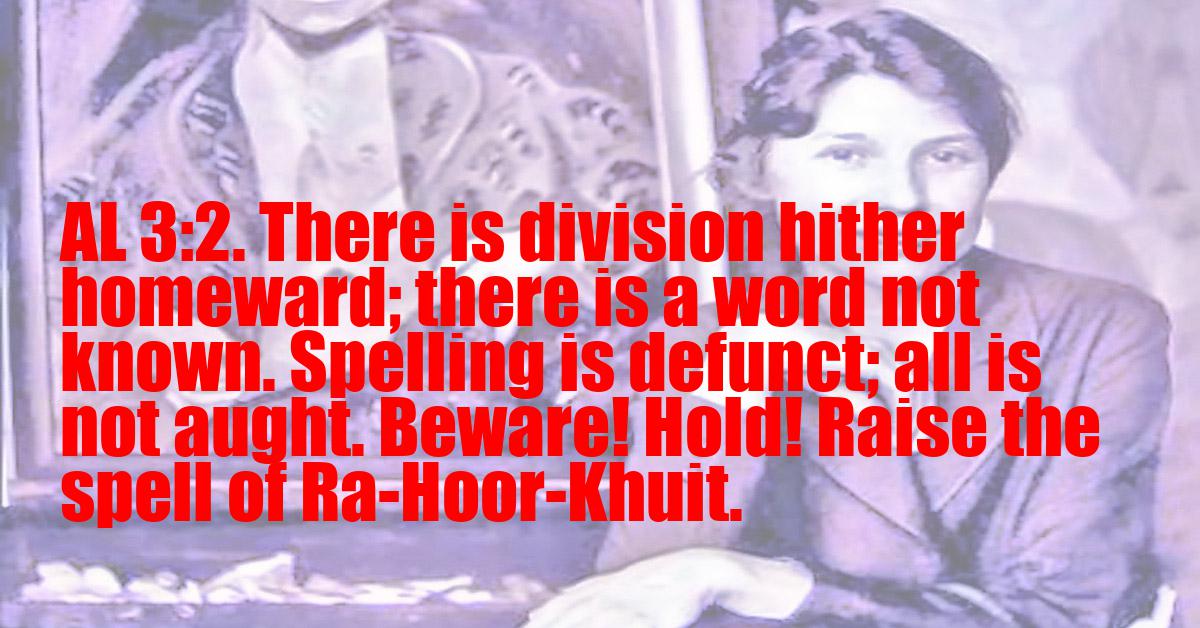 There is division hither homeward; there is a word not known. Spelling is defunct; all is not aught. Beware! Hold! Raise the spell of Ra-Hoor-Khuit!

The Old Comment
Suggested by a doubt arising in the mind of the prophet as to the unusual spelling. But the "I" makes a difference in the qabalistic interpretation of the name.

The New Comment
'Division hither homeward'; a most dour phrase to interpret! Such curious concatenation is sure to imply profound meaning. Homeward must mean 'toward the House of the Speaker. He says, then, that there is 'division', which (as I take it) prevents man from being God. THis is a natural and orthodox meaning, and it goes well with 'there' (I.E. in verse 1) 'is a word not known'. That Word is Abrahadabra, which was not known, it having been concealed by the corrupt spelling "abracadabra'.

'Spelling is defunct'; this seems to be an echo of the statement in Cap. II, v:5 "The rituals of the old time are black". (The word 'defunct' is decidedly curious; the implication is 'no longer able to fulfil its function'.) 'Spelling' then means 'making spells'. And this is characteristic of Ra-Hoor-Khuit, that He demands not words, but acts. (Compare 'The Paris Working'). So then we pass naturally to verse 3. 'All is not aught' is an abrogation of all previous law, on the accession of a Monarch. He wipes out the past as with a sponge.

This phrase is also an excessively neat cipher or hieroglyph of the great Key to this Book. All (AL) is not aught (LA). AL is LA: that is to say, the phases of the Universe X and 0 are identical.
"Beware!" as if it were said to a soldier, "Attention!"
"Hold!", that is, "Steady! LIsten to the Proclamation!"
"Raise the spell of Ra-Hoor Khuit!" That is "Here, I, the New God, utter my Word".