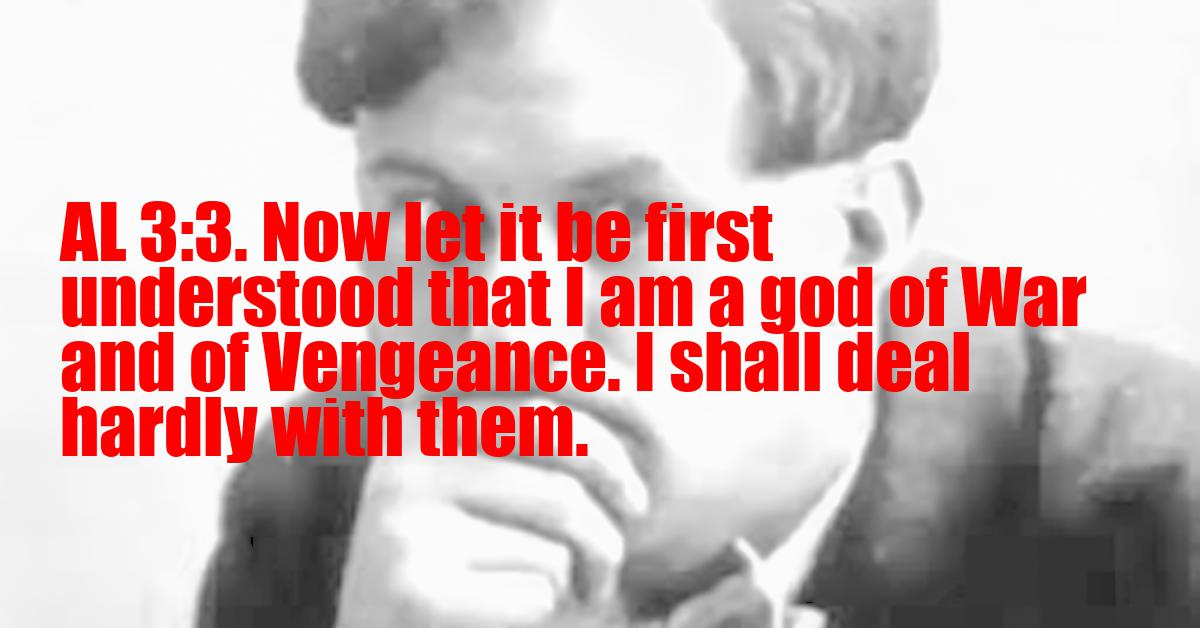 Now let it be first understood that I am a god of War and of Vengeance. I shall deal hardly with them.

The Old Comment
— end. This whole books seems intended to be interpreted literally. It was so taken by the scribe at the time.
Yet a mystical meaning is easy to find. Exempli gratia; vv. 4-9.

The New Comment
Comment seems hardly necessary. The Great War is a mere illustration of this text. The only nations which have suffered are those whose religion was Osirian, or, as they called it, Christian. The exception is Turkey, which foolishly abandoned the principles of Islam to form an unholy alliance with the Giaour. Abdul Hamid would never have made such an ass of himself as the degenerate gang of "Liberty and Progress"; may jakals defile the pyres of their dog fathers!

(The God of Vengeance is in Greek Omicron Alpha-Lambda-Alpha-Sigma-Tau-Omega-Rho, Aleister. For some reason which I have not been able to trace, this God became ALASTOR, the Desert Daemon of the Rabbins, the later the "Spirit of Solitude" of Shelly. The attribution is appropriate enough, the root being apparently A AOMAI, I wander. The idea of "Going" is dreadful to the bourgeois, so that a wanderer is "accursed'. But, me judice, to settle down in life is to abandon the heroic attitude; it is to acquiesce in the stagnation of the brain. I do not want to be comfortable, or even to prolong life; I prefer to move constantly from galaxy to galaxy, from one incarnation to another. Such is my intimate individual Will. It seems as thou this "god of War and of Vengeance" is then merely one who shall cause men to do their won Wills by Going as Gods do, instead of trying to check the irresistible course of Nature.)
P. S. El Ouid Algeria An XX Sol in Sagittarius. The terror of Syria in the reign of Oman was the great soldier and administrator Melekh-Al-Astar. Possibly Jewish mothers used to scare their crying babies by threatening them with this "demon of the desert" and the Rabbins incorporated the "bogey man" in their averse hierarchy.