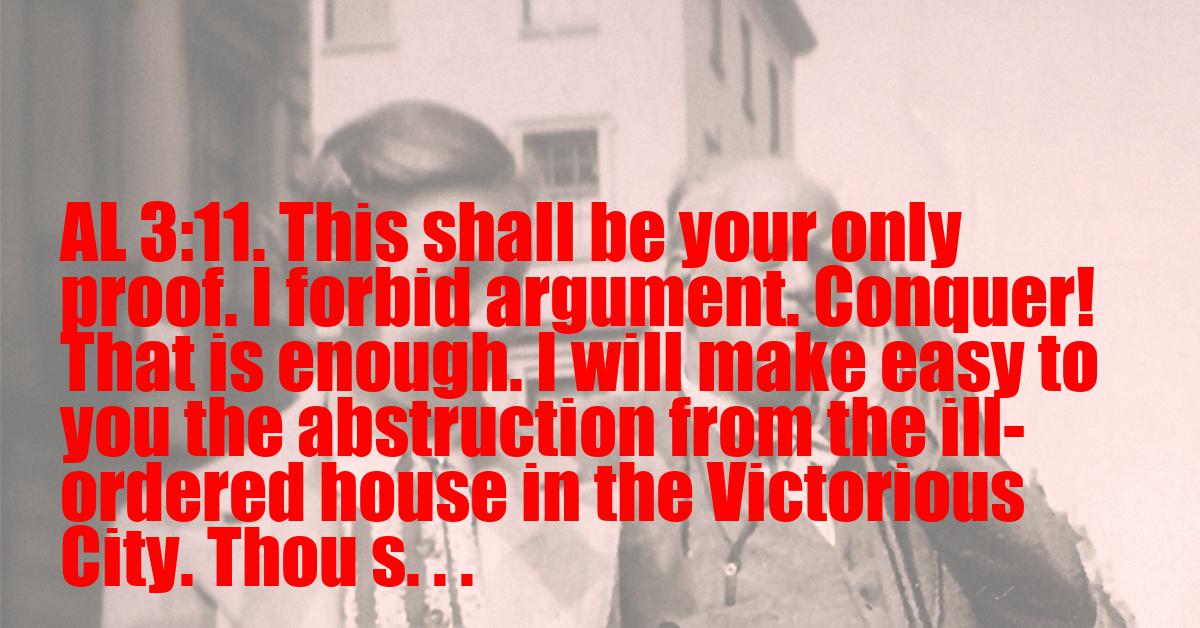 This shall be your only proof. I forbid argument. Conquer! That is enough. I will make easy to you the abstruction from the ill-ordered house in the Victorious City. Thou shalt thyself convey it with worship, o prophet, though thou likest it not. Thou shalt have danger & trouble. Ra-Hoor-Khu is with thee. Worship me with fire & blood; worship me with swords & with spears. Let the woman be girt with a sword before me: let blood flow to my name. Trample down the Heathen; be upon them, o warrior, I will give you of their flesh to eat!

The Old Comment
"Abstruction." It was thought that this meant to combine abstraction and construction, "i.e.", the preparation of a replica, which was done.
Of course the original is in "locked glass."

The New Comment
The Victorious City is of course Cairo (Al-Kahira, the victorious), and the ill-ordered house is the Museum at Bulak.
Ra-Hoor-Khu; why is the name without its termination? Perhaps to indicate the essence of the force.
The Ritual of the Adoration of Ra-Hoor-Khuit is, as one might expect, illustrative of His nature. It seems doubtful whether this Ritual can ever be of the type of symbolic celebration. [Redacted. See WEH note ~ BA.]
{WEH NOTE: The crack about Jews is often deleted from copies of the Comment. Crowley's views in the 20s not withstanding, about 1/3 of the present members of O.T.O. are Jewish, the "Paris Working" was a homosexual love affair between Crowley and Victor Newberg, and Crowley wouldn't even be "up a tree" without the Jewish Qabalah! One of the best features of Crowley is his absent-minded bigotry. No chance that any intelligent person would accept his opinions without repeated trial! In some versions of "Liber Aleph" the passage "never marry a nigger" appears after Crowley was seriously "paved" by his quadroon wife of the time. For the European whites, it is a matter of record that Crowley was sent a notice of expulsion from Beastship by Scarlet Woman Alostrael.}
And it is to be taken that 'the woman' is to take arms in His honour. This woman might be The Scarlet Woman, or perhaps Woman generally. Remember that in the Scarlet Woman 'is all power given'; and I expect a new Semiramis.