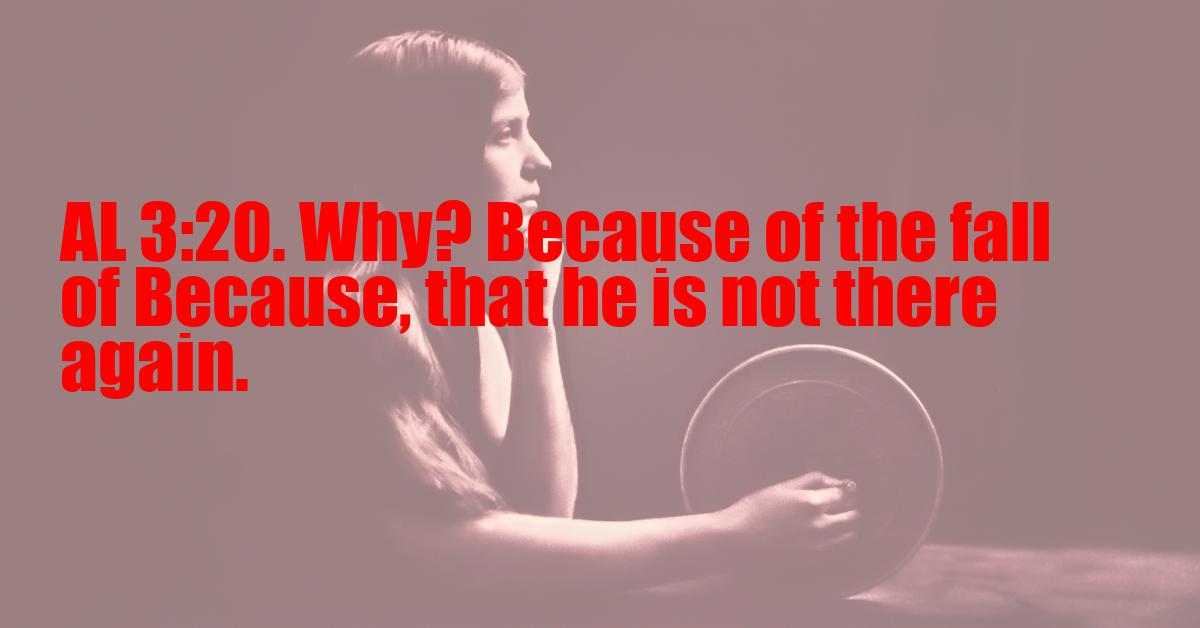 Why? Because of the fall of Because, that he is not there again.

The Old Comment
In answer to some mental "Why" of the prophet the God gives this sneering answer. Yet perhaps therein is contained some key to enable me one day to unlock the secret of verse 19, at present (Sun in 20 Degree Virgo, An. V.) obscure. [Now (Sun in Libra, An VII.) clear.]

The New Comment
There is here a perception of the profound law which opposes thought to action. We act, when we act aright, upon the instructive wisdom inherited from the ages. Our ancestors survived because they were able to adapt themselves to their environment; their rivals failed to breed, and so "good" qualities are transmitted, while 'bad' are sterile. Thus the race-thought, subconscious, tells a man that he must have a son, cost what it may. Rome was founded on the rape of the Sabine women. Would a reasoner have advocated that rape? Was it 'justice' or 'mercy' or 'morality' or 'Christianity'.
There is much on the ethics of this point in Chapter II of this Book. Thomas Henry Huxley in his essay "Ethics and Evolution" pointed out the antithesis between these two ideas; and concluded that Evolution was bound to beat Ethics in the long run. He was apparently unable to see, or unwilling to admit, that his argument proved Ethics (as understood by Victorians) to be false. The Ethics of Liber Legis are those of Evolution itself. We are only fools if we interfere. Do what thou wilt shall be the whole of the Law, biologically as well as in every other way.
Let us take an example. I am an antivaccinationist in a sense which every other antivaccinationist would repudiate. I admit that vaccination protects from small-pox. But I should like everybody to have small-pox. The weak would die; the strong might have pitted faces; but the race would become immune to the disease in a few generations.
On somewhat similar lines, I would advocate, with Samuel Butler, the destruction of all machinery. (I admit the practical difficulties of defining the limits of legitimate devices. The issue is this: how are we to develop human skill? The printing press is admirable in the hands of an Aldus, a Charles T. Jacobi, or even a William Morris. But the cheap mechanical printing of luetic rubbish on rotten pulp with worn types in inferior ink has destroyed the eyesight, putrefied the mind, and deluded the passions, of the multitude). For machines are dodges for avoiding Hard Work; and Hard Work is the salvation of the race. In the Time-Machine, H.G. Wells draws an admirable picture of a dichotomized humanity, one branch etiolated and inane, the other brutalized and automatic. Machines have already nearly completed the destruction of individual craftmanship. A man is no longer a worker, but a machine-feeder. The product is standardized; the result mediocrity. Nobody can obtain What He Will; he must be content with what knavery puts on the market. Instead of every man and every woman being a star, we have an amorphous pullulation of Vermin.