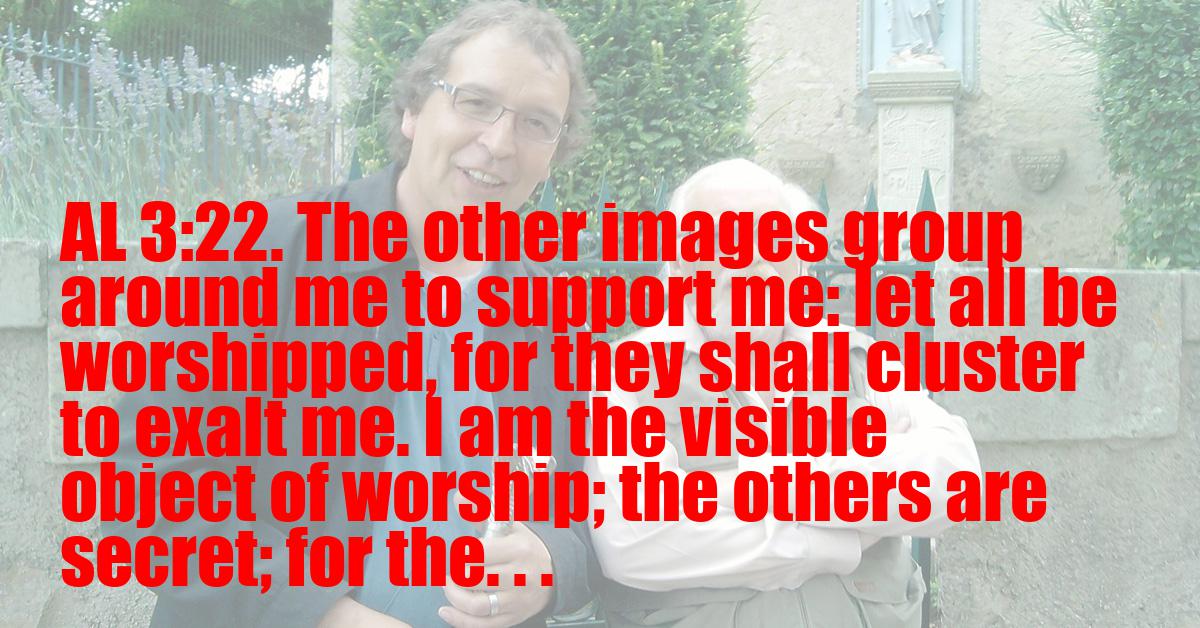 The other images group around me to support me: let all be worshipped, for they shall cluster to exalt me. I am the visible object of worship; the others are secret; for the Beast & his Bride are they: and for the winners of the Ordeal x. What is this? Thou shalt know.

The Old Comment
This first charge was accomplished; but nothing resulted of a sufficiently striking nature to record.
The Ordeal "X" will be dealt with in private.

The New Comment
There are to be no regular temples of Nuith and Hadit, for They are incommensurables and absolutes. Our religion therefore, for the People, is the Cult of the Sun, who is our particular star of the Body of Nuit, from whom, in the strictest scientific sense, come this earth, a chilled spark of Him, and all our Light and Life. His vice-regent and representative in the animal kingdom is His cognate symbol the Phallus, representing Love and Liberty. Ra-Hoor-Khuit, like all true Gods, is therefore a Solar-Phallic deity. But we regard Him as He is in truth, eternal; the Solar-Phallic deities of the old Aeon, such as Osiris, "Christ", Hiram, Adonis, Hercules, &c., were supposed, through our ignorance of the Cosmos, to 'die' and rise again'. Thus we celebrated rites of 'crucifixion' and so on, which have now become meaningless. Ra-Hoor-Khuit is the Crowned and Conquering Child. This is also a reference to the 'Crowned' and Conquering 'Child' in ourselves, our own personal God. Except ye become as little children, said 'Christ', ye shall not enter into the Kingdom of God. The Kingdom of Malkuth, the Virgin Bride, and the Child is the Dwarf-Self, the Phallic consciousness, which is the true life of Man, beyond his 'veils' of incarnation. We have to thank Freud – and especially Jung – for stating this part of the Magical Doctrine so plainly, as also for their development of the connexion of the Will of this 'child' with the True or Unconscious Will, and so for clarifying our doctrine of the 'Silent Self' or 'Holy Guardian Angel'. They are of course totally ignorant of magical phenomena, and could hardly explain even such terms as "Augoeides'; and they are seriously to blame for not stating more openly that this True Will is not to be daunted or suppressed; but within their limits they have done excellent work.