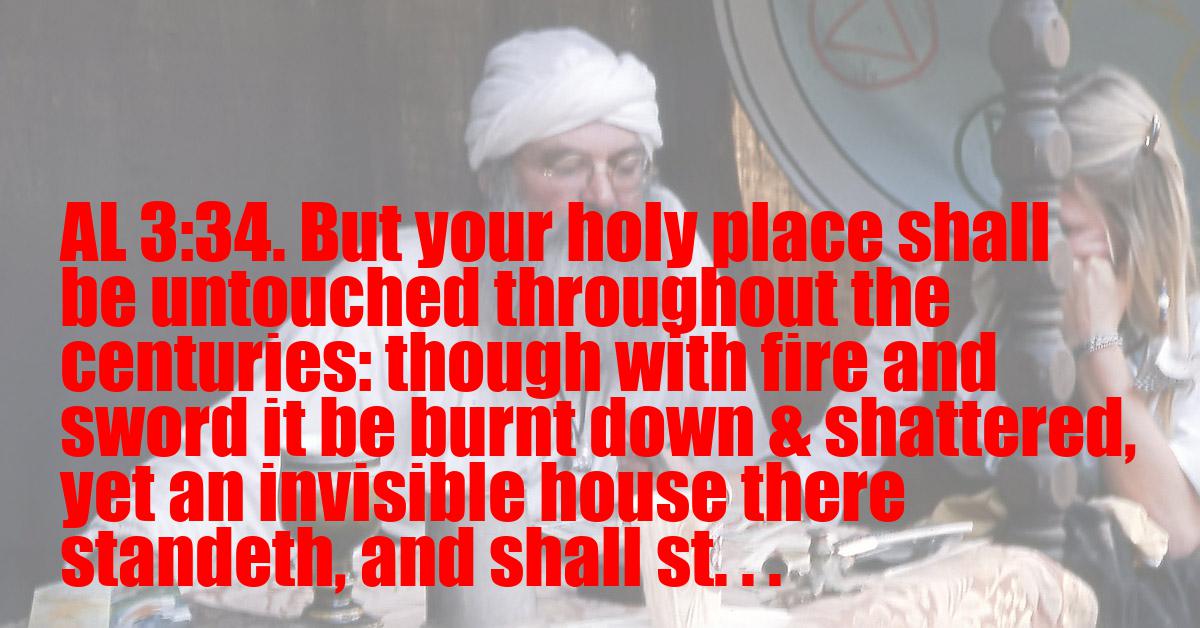 But your holy place shall be untouched throughout the centuries: though with fire and sword it be burnt down & shattered, yet an invisible house there standeth, and shall stand until the fall of the Great Equinox; when Hrumachis shall arise and the double-wanded one assume my throne and place. Another prophet shall arise, and bring fresh fever from the skies; another woman shall awake the lust & worship of the Snake; another soul of God and beast shall mingle in the globèd priest; another sacrifice shall stain the tomb; another king shall reign; and blessing no longer be poured To the Hawk-headed mystical Lord!

The Old Comment
This prophecy, relating to centuries to come, does not concern the present writer at the moment.
Yet he must expound it.
The Hierarchy of the Egyptians gives us this genealogy: Isis, Osiris, Horus.
Now the "pagan" period is that of Isis; a pastoral, natural period of simple magic. Next with Buddha, Christ, and others there came in the Equinox of Osiris; when sorrow and death are the principal objects of man's thought, and his magical formula is that of sacrifice.
Now, with Mohammed perhaps as its forerunner, comes in the Equinox of Horus, the young child who rises strong and conquering (with his twin Harpocrates) to avenge Osiris, and bring on the age of strength and splendour.
His formula is not yet fully understood.
Following him will arise the Equinox of Ma, the Goddess of Justice, it may be a hundred or ten thousand years from now; for the Computation of Time is not here as There.

The New Comment
Note the close connexion between Leo and Libra in the Tarot, the numbers VIII and XI of their Trumps being interchanged with XI and VIII. There is no such violent antithesis as that between Osiris and Horus; Strength will prepare the Reign of Justice. We should begin already, as I deem, to regard this Justice as the Ideal whose Way we should make ready, by virtue of our Force and Fire.
(This happens without our having to worry. For is not Nemo"s True Name TRUTH? (M.A.A.T.). See Liber 370, v. 7.)
Taking the "holy place" to be Boleskine House, it has already been subjected to a sort of destruction. It was presented by me to the O.T.O. and sold in order to obtain funds for the publication of The Equinox Volume III. But the proceeds of the sale were mostly stolen by the then Grand Treasurer General of the Order, one George MacNie Cowie, who became obsessed by the vulgarest form of hate against the Germans, despite my warnings, with reference to verse 59 of this chapter. He became insane, and behaved with the blackest treachery, this theft being but a small portion of his infamies. The incident was necessary to my own initiation.
{WEH NOTE: [As the current Grand Treasurer General of the Order][38], I feel it incumbent upon me to offer a defense of General Cowie. In point of fact Crowley's pro-German involvement in the USA, whether clandestine on behalf of the Allies or not, occasioned a police raid on his British office. Cowie, a deafmute thousands of miles away from Crowley, could hardly prevent the Crown from seizing the Golden Book and such assets as lay about. Cowie's letters to Crowley were filled with invective against the Axis powers out of simple precaution of reputation. Crowley also was unable to understand that the British Government had seized his book sales stock. Crowley instead blamed the management of the warehouse!}

Hrumachis is the Dawning Sun; he therefore symbolizes any new course of events. The "double-wanded one" is "Thmaist of dual form as Thmais and Thmait", from whom the Greeks derived their Themis, goddess of Justice. The student may refer to The Equinox Vol. I., No 2, pages 244-261. Thmaist is the Hegemon, who bears a mitre-headed sceptre, like that of Joshua in the Royal Arch Degree of Freemasonry. He is the third officer in rank in the Neophyte Ritual of the G∴ D∴, following Horus as Horus follows Osiris. He can then assume the "throne and place" of the Ruler of the Temple when the "Equinox of Horus" comes to an end.
The rimed section of this verse is singularly impressive and sublime. We may observe that the details of the ritual of changing officers are the same on every occasion. We may therefore deduce that the description applies to this "Equinox of the Gods" itself. How have the conditions been fulfilled? The introduction to Book 4, Part IV tells us. We may briefly remind the reader of the principal events, arranging them in the form of a rubric, and placing against each the corresponding magical acts of the Equinox previous to ours, as they are symbolized in the legends of Osiris, Dionysus, Jesus, Attis, Adonis, and others.


It may be presumptuous to predict any details concerning the next Aeon after this.