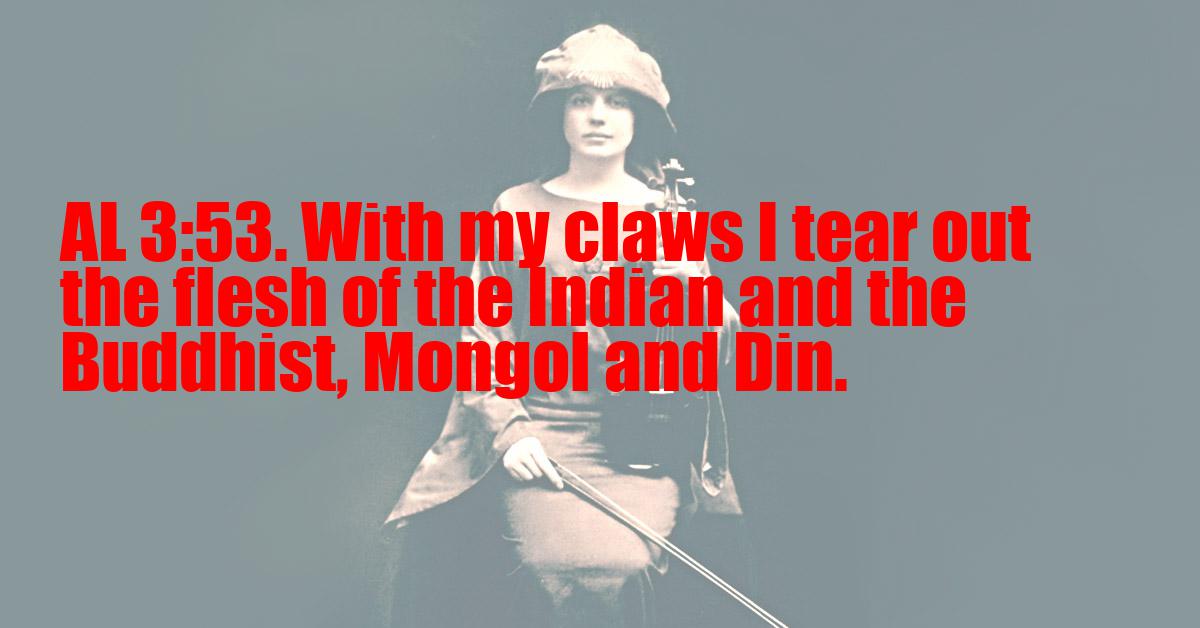 Bethsheba Comment:
flesh + indian + buddhist + mongol + din = 670.
670 is the gate number of the first Palace of the Seven Palaces. The first palace of Yetzirah corresponds to the sephiroth of Yesod and Malkuth in Assiah.

With my claws I tear out the flesh of the Indian and the Buddhist, Mongol and Din.

The Old Comment
(48-62.) Appears to be a plain instruction in theology and ethics. I do not understand "Din."

The New Comment
"The Indian." The religion of Hindustan, metaphysically and mystically comprehensive enough to assure itself the possession of much truth, is in practice almost as superstitious and false as Christianity, a faith of slaves, liars and dastards. The same remarks apply roughly to Buddhism.
'Mongol:" presumably the reference is to Confucianism, whose metaphysical and ethical flawlessness has not saved its adherents from losing those ruder virtues which are proper to a Fighting Animal, and thus yielding at last a civilization coeval with history itself to the barbarous tribes of Europe.
"Din" – 'severity' or 'judgment' may refer to the Jewish Law, rather than to the Faith (ad 'din') of Islam. Assuming this, the six religions whose flesh must be torn out cover the whole globe outside Islam and Christianity.
Why assault their flesh rather than their eyes, as in the other cases? Because the metaphysics, or point of view, is correct – I take Judaism as Qabalistic – but the practice imperfect.