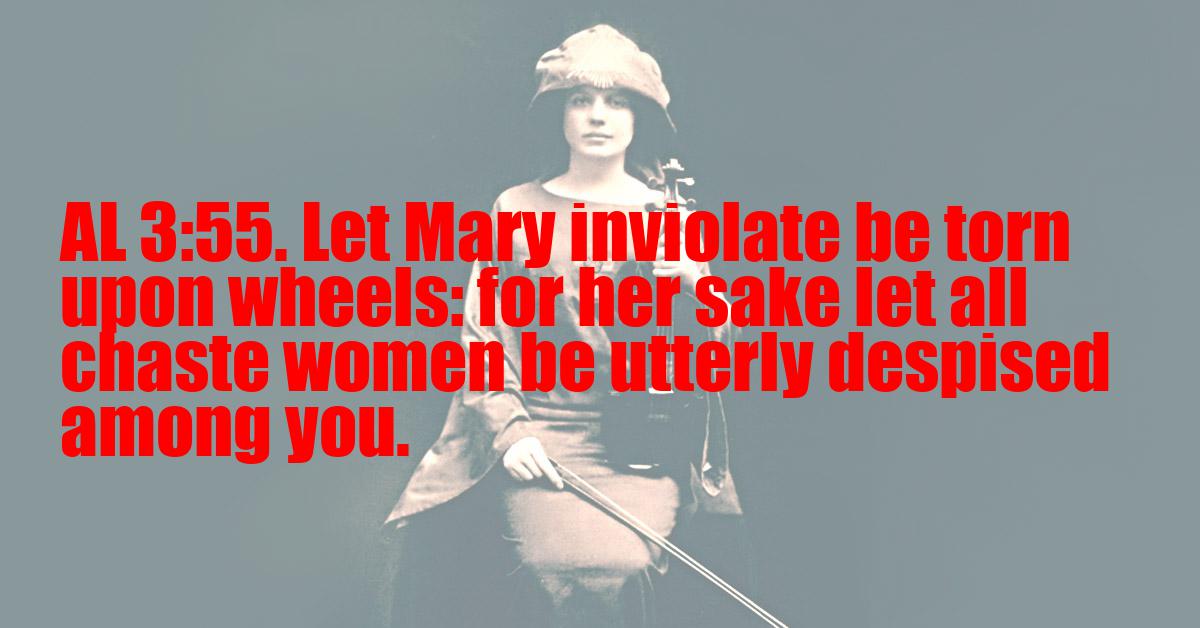 Let Mary inviolate be torn upon wheels: for her sake let all chaste women be utterly despised among you!

The New Comment
The name Mary is connected with Mars, Mors, etc., from the Sanskrit MR to slay and with Mare, the Sea, whose water opposes the Fire of Horus. I here quote a passage from Liber XCVII which deals with this fully.
"Let me strictly meditate this hate of the mother. M R is the Sanskrit root = "Kill," hence Mara, Mors, Maria, and I suppose Meer, Mere, Mer – in short, lots of words meaning death or sea. Note Mordred as the traitor villain in Morte d'Arthur. In Liber Legis we have "Mary" who is to be 'torn upon wheels' apparently because she is 'inviolate.' Liber 418 has some explanation of this: 'because she hath shut herself up', I seem to remember is the phrase.
It appears (I don't remember the Sanskrit as if a dental T or D were inserted phallically to give us Madar, Mu-eta-tau-eta-rho, Mater, Mother, (? meter = measure.)
Does the accent in mere conceal a lost dental? I suppose Jung or Freud has this all worked out in detail.
I have thought this before, long ago, but can't get a satisfactory Qabalah. 240 is a doubling of the Pentagram, of course, and is a sixfold of 40, the number of repressive 'sealed-up' law. By our R.O.T.A., M R is the Sea swallowing the Sun, and the insertion of a Tau would help this in a certain formula of "He lives in the Sun." But that would only boost the Mother, which won't do, for she is the Tomb, the Eater of Flesh, and there's no getting away from it. But apparently she is all right just so far as she is open, to enter or leave at one's pleasure, the Gateway of Eternal Life.
She is Sakti, the Teh, the Magical Door between the Tao and the Manifested World. The great Obstacle than is if that Door be locked up. Therefore Our Lady must be symbolized as an Whore. (Note Daleth, the Door = Venus. The Dove; Free flowing; all this is linked up in the symbol). Clearly, at last, the Enemy is this Shutting up of things. Shutting the Door is preventing the Operation of Change, i.e. of Love. The objection to Calypso, Circe, Armida, Kundry, and Co. is that one is liable to be shut up in their Gardens. The whole of the Book of the Dead is a device for opening the closed vehicles, and enabling the Osiris to go in and out at his pleasure. On the other hand, there seems to be a Sealing Up, for a definite period, in order to allow the Change to proceed undisturbed. Thus Earth lies fallow; the womb is closed during gestation; the Osiris is plugged with talismans. But it is vital to consider this as a strictly temporary device; and to "cut out the idea of Eternal Rest". This Nibbana-idea is the coward – 'Mother's Boy' idea; one ought to take a refreshing dip in the Tao, no more. I think this must be brought forward as the Cardinal Point of Our Holy Law. Thus though Nuit cries "To me!" that is balanced by the Formula of Hadit. "Come unto me" is a foolish word; for it is I that go.
Now the Semen is God (the going-one, as shown by the Ankh or Sandal-strap, which He carries) because he goes in at the Door, stays there for a specified period, and comes out again, having flowered, and still bearing in him that Seed of Going.
Liber 418 explains this succinctly; 3rd Aethyr
"Moreover, there is Mary, a blasphemy against BABALON, for she hath shut herself up; and therefore is she the Queen of all those wicked devils that walk upon the earth, those that thou savest even as little black specks that stained the Heaven of Urania. And all these are the excrement of Choronzon."
It is this 'shutting up' that is hideous, the image of death. It is the opposite of Going, which is God.
Women under Christianity are kept virgin for the market as Strasbourg geese are nailed to boards till their livers putrefy. The nature of woman has been corrupted, her hope of a soul thwarted, her proper pleasure balked, and her mind poisoned, to titillate the jaded palates of senile bankers and ambassadors.