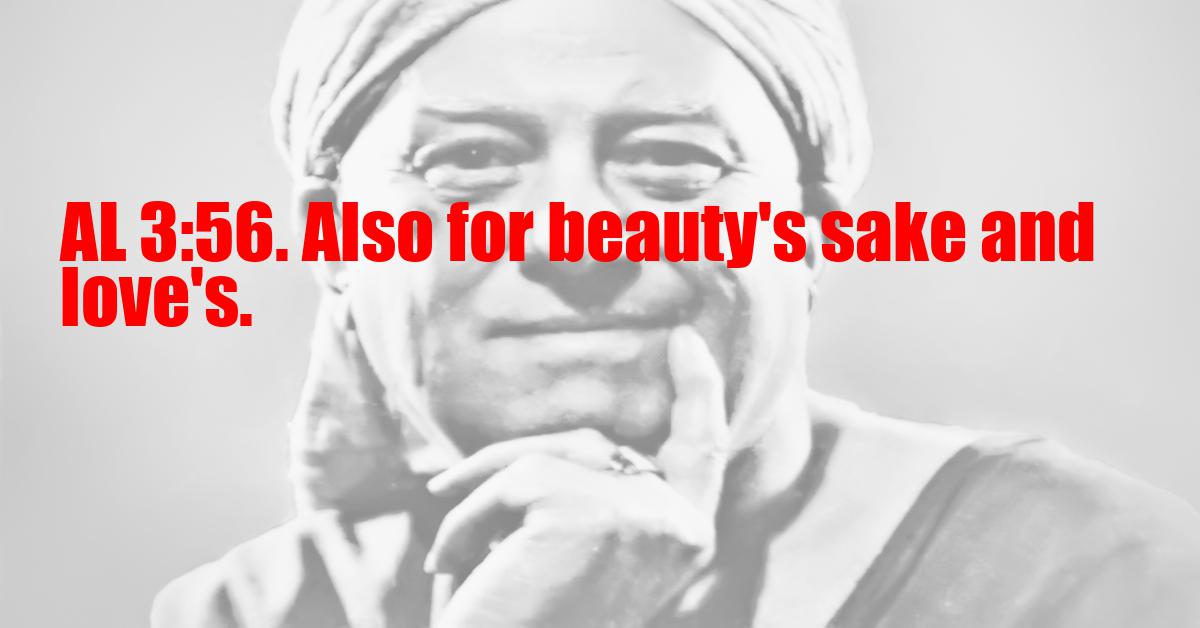 Also for beauty’s sake and love’s!

The New Comment
It is obvious to the physiologist that beauty (that is, the fitness of proportion) and love (that is, natural attraction between things whose union satisfies both) need for fulfilment absolute spontaneity and freedom from restriction. A tree grows deformed if it be crowded by other trees or by masonry; and gunpowder will not explode it its particles are separated by much sand.
If we are to have Beauty and Love, whether in begetting children or works of art, or what not, we must have perfect freedom to act, without fear or shame or any falsity. Spontaneity, the most important factor in creation, because it is evidence of the magnetic intensity and propriety of the will to create, depends almost wholly on the absolute freedom of the agent. Gulliver must have no bonds of packthread. These conditions have been so rare in the past, especially with regard to love, that their occurrence has usually marked something like an epoch. Practically all men work with fear of result or lust of result, and the 'child' is a dwarf or still-born.
It is within the experience of most people that pleasure-parties and the like, if organized on the spur of the moment, are always a success, while the most elaborate entertainments, prepared with all possible care, often fall flat. Now one cannot exactly give rules for producing a 'genius' to order, a genius in this sense being one who has the Idea, and is fortified with power to enflame the enthusiasm of the crowd, with wit to know, and initiative to seize, the psychological moment.
But one can specify certain conditions, incompatible with the manifestation of this spontaneity; and the first of these is evidently absolute freedom from obstacles, internal or external, to the idea of the 'genius.'
It is clear that a woman cannot love naturally, freely, wholesomely, if she is bound to contaminate the purity of her impulse with thoughts of her social, economical, and spiritual status. When such things restrain her, Love may conquer, as often enough it does; but the Beauty engendered is usually stunted or wried, assuming a tragic or cynic mask. The history of the world is full of such stories; it is, one may almost say, the chief motive of Romance. I need only mention Tristan, Paolo, Romeo, Othello, Paris, Edward the Second, Abelard, Tannhauser, of old, and recently Mrs. Asquith, Maud Allan, Charles Stuart Parnell, Sir Charles Dilke, Lord Henry Somerset, and Oscar Wilde, Down to 'Fatty' Arbuckle!
Men and women have to face actual ruin, as well as the probability of scandal and disgust, or consent to love within limits which concern not love in the least. The chance of spontaneity is therefore a small one; and, should it occur and be seized, the lawyers hasten to hide under the bridal bed, while the Families, gluing eye to chink and keyhole, intrude their discordant yowls on the Dust.
Then, when love dies, as it must if either party have more imagination than a lump of putty, the fetters are fixed. He or she must go through the sordid farce of divorce if the chance of free choice is to be recovered; and even at that the fetters always leave an incurable ulcer; it is no good playing the game of respectability after one is divorced.
Thus we find that almost the only love-affairs which breed no annoyance, and leave no scar, are those between people who have accepted the Law of Thelema, and broken for good with the tabus of the slave-gods. The true artist, loving his art and nothing else, can enjoy a series of spontaneous liaisons, all his life long, yet never suffer himself, or cause any other to suffer.
Of such liaisons Beauty is ever the child; the wholesome attitude of the clean simple mind, free from all complications alien to Love, assures it.
Just as a woman's body is deformed and diseased by the corset demanded by Jaganath Fashion, so is her soul by the compression of convention, which is a fashion as fitful, arbitrary, and senseless as that of the man-milliner, though they call him God, and his freakish Fiat pass for Everlasting Law.
The English Bible sanctions the polygamy and concubinage of Abraham, Solomon and others, the incest of Lot, the wholesale rape of captured virgins, as well as the promiscuity of the first Christians, the prostitution of temple servants, men and women, the relations of Johannes with his master, and the putting of wandering Prophets to stud, as well as the celibacy of such people as Paul. Jehovah went so far as to slay Onan because he balked at fertilizing his brother's widow, condoned the adultery, with murder of the husband, of David, and commanded Hosea to intrigue with a "wife of whoredom." He only drew the moral line at any self-assertion on the part of a woman.
In the past man has bludgeoned Woman into gratifying the lust of her loathed tyrant, and trampled the flower of her own love into the mire; making her rape more beastly by calling her antipathy Chastity, and proving her an unclean thing on the evidence of the torn soiled blossom.
She has had no chance to Love unless she first renounced the respect of society, and found a way to drive the wolf of hunger from her door.
Her chance is come! In any Abbey of Thelema any woman is welcome; there she is free to do her will, and held in honour for the doing. The child of love is a star, even as all are stars; but such an one we specially cherish; it is a trophy of battle fought and won!