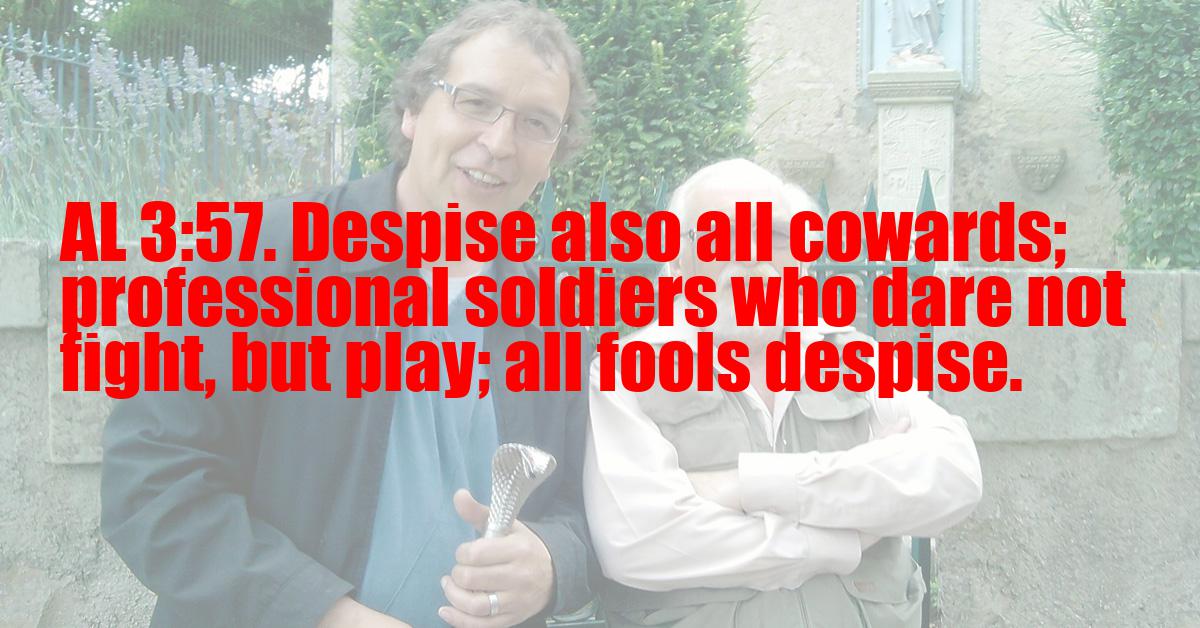 Despise also all cowards; professional soldiers who dare not fight, but play; all fools despise!

The New Comment
To fight is the right and duty of every male,as of every woman to rejoice in his strength and to honour and perpetuate it by her love. My primary objection to Christianity is 'gentle Jesus, meek and mild,' the pacifist, the conscientious objector, the Tolstoyan, the 'passive resister.' When the Kaiser fled, and the Germans surrendered their fleet, they abandoned Nietzshe for Jesus. Rodjestvensky and Gervera took their fleets out to certain destruction. The Irish Revolutionists of Easter Week, 1916, fought and died like men; and they have established a tradition.
'Jesus' himself, in the legend, 'set his face as a flint to go to Jerusalem,' with the foreknowledge of his fate. But Christians have not emphasized that heroism since the Crusades. The sloppy sentimental Jesus of the Sunday-school is the only survivor; and the War killed him, thank Ares!
When the Nonconformist Christian churches, especially in America, found the doctrine of Eternal Punishment no longer tenable, they knocked the bottom out of their religion. There was nothing to fight for. So they degenerated into tame social Centres, so that Theosophy with its Black Brothers, Mrs. Eddy with her Mental Arsenic Experts, the T.K. with his Hypnotists and Jesuits, and Billy Sunday with his Hell Fire {WEH NOTE: variation: "…Experts, and the Evangelical Revivalists with their Hell Fine…"}, made people's flesh creep once more, and got both credit and cash.
The Book of the Law flings forth no theological fulminations; but we have quarrels enough on our hands. We have to fight for Freedom against oppressors, religious, social, or industrial; and we are utterly opposed to compromise. Every fight is to be a fight to the finish; each one of us for himself, to do his own will; and all of us for all, to establish the Law of Liberty.
We do not want "professional soldiers," hired bravos sworn to have no souls of their own. They "dare not fight;" for how should a man dare to fight unless his cause be a love mightier than his love of life? Therefore they "play;" they have sold themselves; their Will is no more theirs; life is no longer a serious thing to them; therefore they wander wastrel in clubs and boudoirs and greenrooms; bridge, billiards, polo, pettie coats puff out their emptiness; scratched for the Great Race of Life, they watch the Derby instead.
Brave such may be; they may well be (in a sense) classed with the rat; but brainless and idle they must be, who have no goal beyond the grave, where, at the best, chance flings fast-withering flowers of false and garish glory. They serve to defend things vital to their country; they are the skull that keeps the brain from harm? Oh foolish brain! Wet thou not wiser to defend thyself, rather than trust to brittle bone that hinders thee from growth?
Let every man bear arms, swift to resent oppression, generous and ardent to draw sword in any cause, if justice or freedom summon him!
"All fools despise." In this last phrase the word "fools" is evidently not to be taken in its deeper mystical sense, the context plainly bearing reference to ordinary life.
But the "fool" is still as described in the Tarot Trump. He is an epicene creature, soft and sottish, with an imbecile laugh and a pretty taste in fancy waistcoats. He lacks virility, like the ox which is the meaning of the letter Aleph which describes the Trump, and his value is Zero, its number. He is air, formless and incapable of resistance, carrier of sounds which mean nothing to it, swept up into destructive rages of senseless violence from its idleness, incalculably moved by every pressure or pull. One-fifth is the fuel of fire, the corruption of rust; the rest is inert, the soul of explosives, with a trace of that stifling and suffocating gas which is yet food for vegetable, as it is poison to animal, life.
We have here a picture of the average man, of a fool; he has no will of his own, is all things to all men, is void, a repeater of words of whose sense he knows nought, a drifter, both idle and violent, compact partly of fierce passions that burn up both himself and the other, but mostly of inert and characterless nonentity, with a little heaviness, dullness, and stupefaction for his only positive qualities.
Such are the 'fools' whom we despise. The man of Thelema is vertebrate, organized, purposeful, steady, self-controlled, virile; he uses the air as the food of his blood; so also, were he deprived of fools he could no live. We need our atmosphere, after all; it is only when the fools become violent madmen that we need our cloak of silence to wrap us, and our staff to stay us as we ascend our mountain-ridge; and it is only if we go down into the darkness of mines to dig us treasure of earth that we need fear to choke on their poisonous breath.