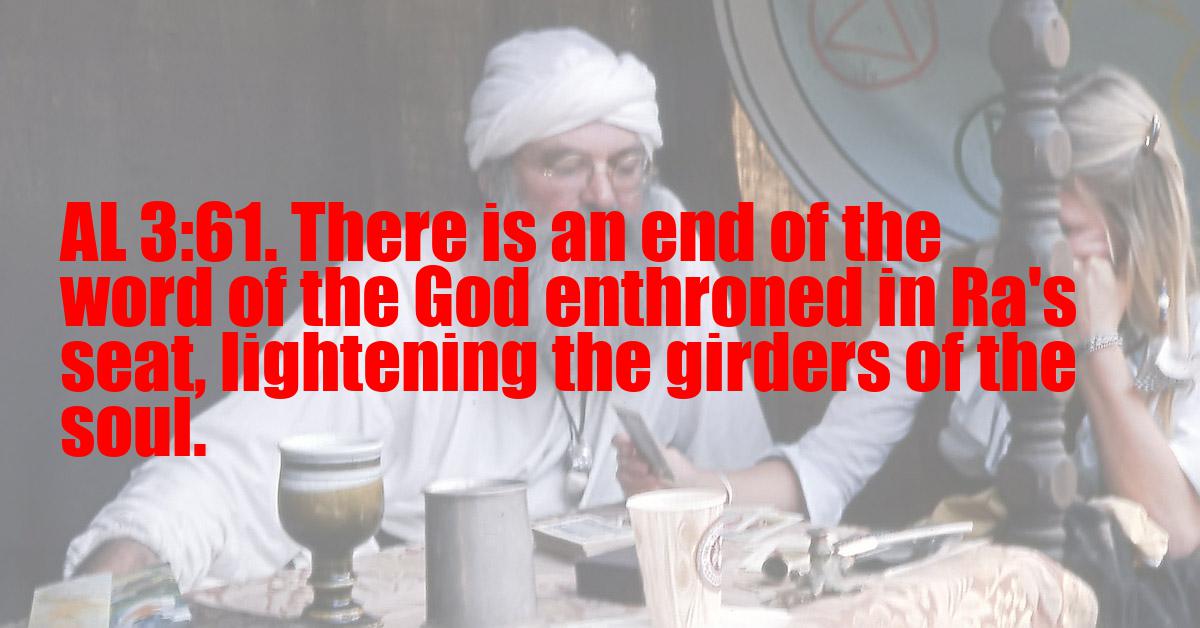 There is an end of the word of the God enthroned in Ra’s seat, lightening the girders of the soul.

The New Comment
Note that Heru-Ra-Ha is not merely a particular form of Ra, but the God enthroned in Ra's seat. (In Liber 418, He is explicitly defined as the Viceroy of the Unknown King.) That is, His Kingdom on earth is temporary, as explained in verse 34. And he is here conceived as the Hierophant, "lightening the girders of the soul," that is, bringing man to initiation.
These "girders" imply the skeletal structure on which the soul is supported, the conditions of its incarnation. Man is the heir of ages of evolutionary experience, on certain lines, so that he is organized on formulae which have determined the type of his development. Of some such formulae we are conscious, but not of all. Thus it is true for all men – empirically – that a straight line is the shortest distance between two points; some savages may not know this consciously, but they base their actions on that knowledge.
Now we cannot doubt that consciousness has developed elsewhere than in man; only a blind megalomaniac or a Christian divine could suppose our infinitesimal mote of a planet the sole habitat of Mind, especially as our minds are, at best, totally incompetent to comprehend Nature. It is also unlikely that our Earth's physical conditions of temperature, atmosphere, density and so on, which some still regard as essential to Life, are found frequently; we are only one of nine planets ourselves, and it is absurd to deny that life exists on the others, or in the Sun himself, just because the conditions of our own life are absent elsewhere.
Such Life and Mind may therefore be utterly different to anything we know of; the 'girders' of their souls in other spheres may be other than ours.
The above argument is a case of a "girder;" we are bound mentally by our race-experience of the environment in which our own lives flourish. A pioneer choosing a camp must look for wood, water, perhaps shelter, perhaps game. In another planet he might not need any of these.
The 'girders' which deternmine the 'form' of our souls are therefore limitations to our thought, as well as supports. In the same way, rails help a train to run easily, but confine it to a definite direction.
The 'laws' of Nature and Thought, Mathematics, Logic, and so on, are "girders" of this sort.
Our race-inherited conceptions of space prevented men, until quite recent years, from conceiving a non-Euclidean geometry, or the existence of a fourth Dimension.
The initiate soon becomes aware of the un-truth of many of these limiting laws of his mind; he has to identify Being with not-Being, to perceive Matter as continuous and homogeneous, and so for many another Truth, apprehended directly by pure perception, and consequently not to be refuted by syllogistic methods. The Laws of Logic are thus discovered to be superficial, and their scope only partial.
(It is significant in this connexion that such advanced thinkers as the Hon. Bertrand Russell have found themselves obliged to refer mathematical laws to Logic; it seems to have escaped them that the Laws of Logic are no more than the statement of the limitations of their own intelligence. I quote The Book of Lies, ΚΕΦΑΛΗ ME
CHINESE MUSIC
"Explain this happening!"
"It must have a 'natural' cause."
"It must have a 'supernatural' cause."
} Let these two asses be set to grind corn.
May, might, must, should, probably, may be, we may safely assume, ought, it is hardly questionable, almost certainly – poor hacks! let them be turned out to grass!
Proof is only possible in mathematics, and mathematics is only a matter of arbitrary conventions.
And yet doubt is a good servant but a bad master; a perfect mistress, but a nagging wife.
"White is white" is the lash of the overseer; "white is black" is the watchword of the slave. The Master takes no heed.
The Chinese cannot help thinking that the octave has 5 notes.
The more necessary anything appears to my mind, the more certain it is that I only assert a limitation.
I slept with Faith, and found a corpse in my arms on awaking; I drank and danced all night with Doubt, and found her a virgin in the morning."
Now then consider the man whose soul has thoroughly explored its structure, is actively conscious of its 'girders' of axiom. He must find that they confine him like prison bars, when he would gain the freedom of the initiate.
In this verse therefore doth the God "enthroned in RA's seat" declare that his Word lightens (or removes) the oppression of these 'girders of the soul.'
The study of this chapter is accordingly a sound preparatory course for whosoever will become Initiate.
See also the six verses following this; the word increases in value as the reader advances on the Path, just as a Rembrandt is a "pretty picture" to the peasant, a 'fine work of art" to the educated man, but to the lover of Beauty a sublime masterpiece, the greater as he grows himself in greatness.