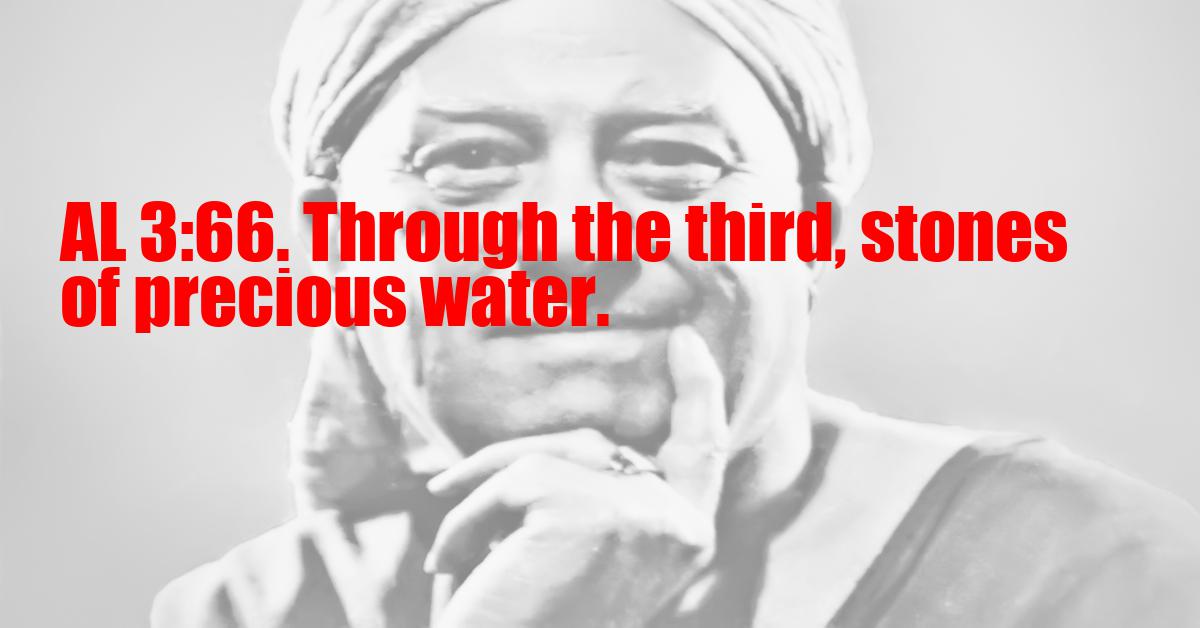 Through the third, stones of precious water.

The New Comment
Now once again the adept aspires and comes to the sphere called the Crown numbered 1, referred to the God Ra-Hoor-Khuit himself in man, to the Beginning of Whirling Motions, and the First Mode of Matter. (See Liber 777, the Equinox, and Book 4 for these attributions.) Its secret Truth is that Earth is Heaven as Heaven is Earth, and shows the aspirant to himself as being a star. All that seemed to him reality is not even to be deemed illusion, but all one light infusing star and star. The Many, each of them, are the One; each individual, no twain alike, yet all identical; this he knows and is, for now the Word hath lightened his soul's girders. (The logic of the Ruach – the normal intellect – is transcended in Spiritual Experience. It is, evidently, impossible to "explain" how this can be.)
In the Number 6 he saw God interlocked with man, two trinities made one; but here he knows that there was never but one.
Thus now this Book is 'stones of precious water'; its Light is not the borrowed light of gold, but is shed through the Book itself, clearsparkling, flashed from its facets. Each phrase is a diamond; each is diverse, yet all identical. In each the one Light laughs!
Now to this sphere came he by the Path called the High Priestess; She is his Silent Self, virgin beyond all veils, made free to teach him, by virtue of this third ordeal wherein, passing through the abyss, he has stripped from him every rag of falsehood, his last complexes, even his phantasy that he called 'I'. And so he knows at last now the soiled harlot's dress was mere disguise; naked in Moonlight shines the maiden Body!