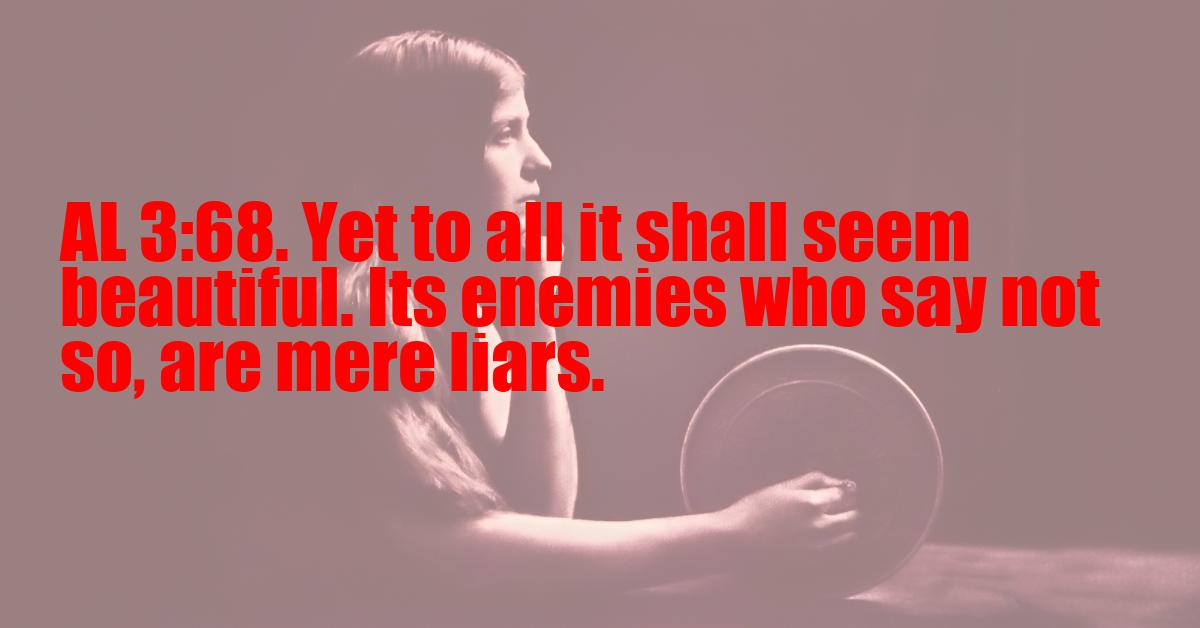 Yet to all it shall seem beautiful. Its enemies who say not so, are mere liars.

The New Comment
To all; i.e. to Pan; or to AL.
The sudden degradation of the style and the subject, the petulance of the point of view; what should these things intend?

It sounds as though the scribe had protested violently in his mind against the chapter, and was especially aggrieved at the first paragraph of this verse, which, taken at its face value, promises a phenomenon impossible in literature. The second phrase may then be a contemptuous slap at the scribe who was perhaps thinking "Well, it seems otherwise to me, for one!" and the hit was a bull's eye; for I was a mere liar when I thought it. I was so enraged at having engaged myself on such an adventure, so hated "the hand and the pen" which I pledged to transcribe sentiments so repugnant to mine, such a jargon of absurdities and vulgarities as seemed to me displayed in many parts of this third chapter, that I would have gone to almost any length, short of deliberate breach of my thoughtless promise to my wife to see it through, to discredit the Book. I did deface my diaries with senseless additions; I did carry out my orders in such a way as to ensure failure, I did lose the Manuscript more or less purposely. I did threaten to publish the Book 'to get rid of it'; and at this verse I was one of the 'mere liars'. For its Beauty already constrained even the world-infected man, the nigh-disillusioned poet, the clinker-clogged lover, the recusant mystic. And, as I know now, the thought that all these things were myself was a lie. Yet the Liar was at pains to lie to itself! Why did it so? It knew that one day this Book would shine out and dissolve it; it feared and hated the Book; and, gnashing its teeth, swore falsely, and denied the Beauty that bound it.
As for my true Self, silent abiding its hour, is not this Book to it the very incarnation of Beauty? What is Beauty but the perfect expression of one's own Truth? And is not this Book the Word of Aiwaz, and is not He mine Holy Guardian Angel, the master of my Silent Self, His virgin bride on whom His love hath wrought the mystery of Identity?