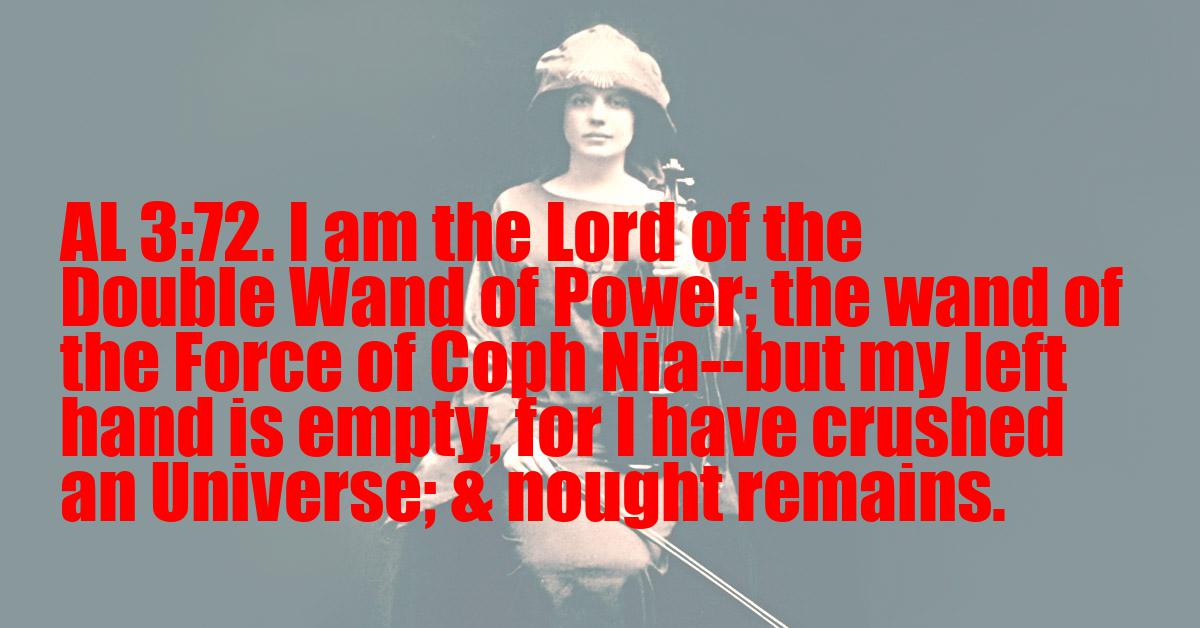 I am the Lord of the Double Wand of Power; the wand of the Force of Coph Nia — but my left hand is empty, for I have crushed an Universe; & nought remains.

The Old Comment
(70-72.) A final pronouncement of His attributes. I do not know the exact meaning of v. 71. [Later, Sun in Libra, An VII. Yes: I do.]
Coph Nia. I cannot trace this anywhere; but KOPhNIA adds to 231. Nia is Ain backwards; Coph suggests Qoph. All very unsatisfactory.

The New Comment
"The Double Wand of Power" is a curious variant of the common "Wand of Double Power"; the general meaning is "I control alike the Forces of Active and Passive".
"Coph Nia": the original MS. has "—-"; left incomplete as not having been properly heard. The present text was filled in later in her own hand by the first Scarlet Woman.
The Egyptian Gods are usually represented as bearing an Ankh, or sandal-strap, in the left hand, the wand being in the right. This ankh signifies the power to go, characteristic of a god.
But apparently Ra Hoor Khuit had an Universe in his left hand, and crushed it so that naught remains. I think this "Universe" is that of monistic metaphysics; in one hand is the "Double Wand", in the other "naught". This seems to refer to the 'none and Two' ontology outlined in previous notes.